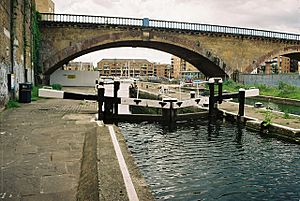 Original bridge at Limehouse on the London and Blackwall Railway. It now carries a branch of the Docklands Light Railway

The London and Blackwall Railway (L&BR) in East London, England, ran from Minories to Blackwall via Stepney, with a branch line to the Isle of Dogs. It was originally called the Commercial Railway. It connected central London to many of London's docks.

In 1852 the North London Railway linked up with the L&BR at Poplar. In 1871 another branch line, the Millwall Extension Railway, opened from Millwall Junction to Millwall Docks to serve the West India Docks better. A year later the line was extended to North Greenwich.

Much of the infrastructure of the L&BR was re-used as part of the Docklands Light Railway, which opened on 31 August 1987.

All content from Kiddle encyclopedia articles (including the article images and facts) can be freely used under Attribution-ShareAlike license, unless stated otherwise. Cite this article:
London and Blackwall Railway Facts for Kids. Kiddle Encyclopedia.