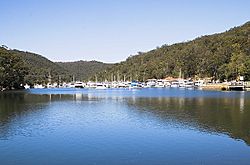 View of the marina at Bobbin Head 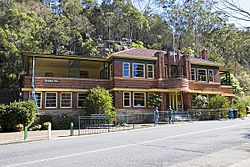 Facilities at Bobbin Head include a marina, picnic areas with gas barbecues, a licensed restaurant and kiosk at the marina, small boat hire at the marina, and a lunch-time restaurant in what used to be the Bobbin Head Inn, which also contains a National Parks information centre. The area also contains many fire trails and a mangrove boardwalk. Aboriginal engravings can be observed along some of the bushwalk trails. There is also a discovery trail along the waterfront inside the marina that chronicles the history of the area.

All content from Kiddle encyclopedia articles (including the article images and facts) can be freely used under Attribution-ShareAlike license, unless stated otherwise. Cite this article:
Bobbin Head, New South Wales Facts for Kids. Kiddle Encyclopedia.