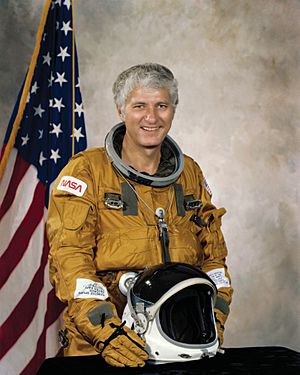 Henry Warren "Hank" Hartsfield, Jr. (November 21, 1933 – July 17, 2014) was an American NASA astronaut and test pilot. He was also a United States Air Force officer and astronaut. He spent over 480 hours in space. He was best known for being on board the Space Shuttle Columbia. He was also a commander for the Discovery and Challenger missions.

Hartsfield was born in Birmingham, Alabama. He was married and had two daughters.

Hartsfield died from problems caused by back surgery on July 17, 2014 in Houston, aged 80.

All content from Kiddle encyclopedia articles (including the article images and facts) can be freely used under Attribution-ShareAlike license, unless stated otherwise. Cite this article:
Henry Hartsfield Facts for Kids. Kiddle Encyclopedia.