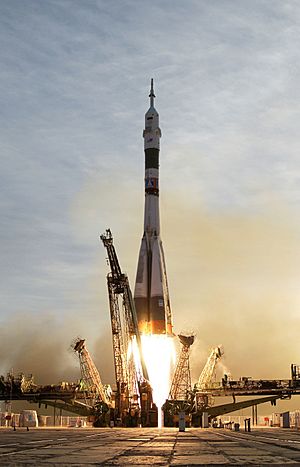 A launch vehicle or carrier rocket is a rocket used to take a payload from Earth's surface through outer space. This can be to another place on earth (Sub-orbital transportation), or into space. Sub-orbital vehicles aren't as powerful as orbital vehicles must be. They use more than one stage so that they have enough delta-v performance. Many different rocket fuels can be used, and some rockets have solid rocket boosters attached.

Most launch vehicles are expendable, which means that they can only be used once. This means that lots of expensive equipment is lost, but it also means that the launch vehicle can carry a heavier payload. SpaceX has developed a reusable rocket, called the Falcon 9. The first stage of this rocket can land and be relaunched. Parts of the Space Shuttle were also reusable. There are many different types of launch vehicle. The vehicle that is used depends on the spaceport, the mass of the payload, and the orbit that the payload is being launched to. Many countries try and build their own rockets as part of their national space programs.

All content from Kiddle encyclopedia articles (including the article images and facts) can be freely used under Attribution-ShareAlike license, unless stated otherwise. Cite this article:
Launch vehicle Facts for Kids. Kiddle Encyclopedia.