Wilkinsburg was founded and developed by highly religious European immigrants. The borough has a remarkably high concentration of churches, mostly Protestant, which is unusual in a predominantly Catholic region of the country. Wilkinsburg separated from the city of Pittsburgh in 1871. According to borough leader James Kelly, this was in order to maintain the religious integrity of the community. Wilkinsburg was known during this time by many as "The Holy City".

In 1916, the world's first commercially licensed radio station, KDKA, began broadcasting here as experimental station 8XK from a small garage owned by Frank Conrad before it was launched with its current call letters on November 2, 1920. In 1923, Wilkinsburg-based Russian immigrant Vladimir Zworykin designed and patented the iconoscope, the photocell "eye" of early television cameras. Today, ABC affiliate WTAE-TV is located in the borough on Ardmore Boulevard.

Although the borough has become economically depressed in recent years, many efforts are being made to change this. The Wilkinsburg Community Development Center (WCDC, open since 2008) on Wood Street has become a huge part in bringing positive change to the neighborhood through helping local businesses move in, spreading the word about events going on, and bringing the people of Wilkinsburg together. 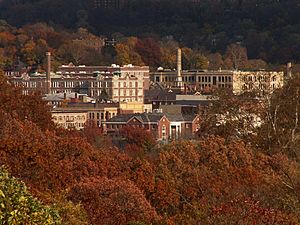 The central business district of Wilkinsburg

According to the United States Census Bureau, the borough has a total area of 2.3 square miles (6.0 km2), all of it land.

Until September 14, 1975, Wilkinsburg had inter-city passenger rail service. On that day Amtrak discontinued service, citing a total of 128 passengers boarding or alighting in the first six months of 1975, the lowest system-wide. The last train serving Wilkinsburg was the National Limited, which operated daily between New York City and Kansas City, Missouri. The PennDOT-operated Parkway Limited provided commuter service to Pittsburgh for nine months in 1981 but was also canceled because of low ridership.

In its early history, education in Wilkinsburg was completely private. Many schools were started by different teachers and held in their homes. The Wilkinsburg Academy, founded in 1852, was the beginning of large-scale schooling. The Free Common School Act of 1834 was adopted by the borough in 1840; James Kelly loaned money for the first common school which served until 1850. From this time, the number of students rose exponentially. By 1910, there were 4,253 students in six public schools. Today, Wilkinsburg School District consists of Kelly Elementary and Turner Elementary schools. Due to lack of funding, Wilkinsburg's Junior and Senior High schools recently closed. The district now outsources Junior and Senior High School education to Westinghouse High School in the Pittsburgh Public School district. The graduating class of 2016 was the last to graduate from Wilkinsburg High School.

Wilkinsburg is also home to the Sister Thea Bowman Catholic Academy. This is a Catholic elementary school which was formed as a merger of St. James School in Wilkinsburg and Holy Rosary in Homewood (Pittsburgh). The new school is housed in the former St. James School building and educates children from pre-kindergarten through eighth grade.

All content from Kiddle encyclopedia articles (including the article images and facts) can be freely used under Attribution-ShareAlike license, unless stated otherwise. Cite this article:
Wilkinsburg, Pennsylvania Facts for Kids. Kiddle Encyclopedia.