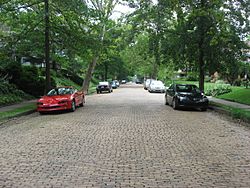 Swissvale is a borough in Allegheny County, Pennsylvania, 9 miles (14 km) east of downtown Pittsburgh. Named for a farmstead owned by James Swisshelm, during the industrial age it was the site of the Union Switch and Signal Company of George Westinghouse. The population was 8,983 at the 2010 census. In 1940, 15,919 people lived there.

Swissvale is bordered by Edgewood to the north, Braddock Hills to the east, North Braddock to the southeast, Rankin to the south, and the Pittsburgh neighborhoods of Regent Square and Swisshelm Park to the west. (The area known as Regent Square encompasses portions of Pittsburgh, Wilkinsburg, Edgewood, and Swissvale.) Directly across the Monongahela River to the southwest is the borough of Munhall.

Since 1874 The Allegheny Car & Transportation Shops Had Provided Well Paying Jobs To Local Citizens & Were Later Purchased By George Westinghouse. George Westinghouse, the President of Westinghouse Air Brake Company, formed the Union Switch & Signal company and maintained that facility in Swissvale. Vladimir K. Zworykin, a principal inventor of television, worked for Westinghouse as a fresh immigrant from Russia and lived in Swissvale with his wife and daughter.

Swissvale is served by the Woodland Hills School District.

Swissvale is served by the Roslyn and Swissvale stations on the Martin Luther King Jr. East Busway.

All content from Kiddle encyclopedia articles (including the article images and facts) can be freely used under Attribution-ShareAlike license, unless stated otherwise. Cite this article:
Swissvale, Pennsylvania Facts for Kids. Kiddle Encyclopedia.