Braddock Hills is located northwest of Braddock's Field, the site of General Edward Braddock's 1755 defeat during the French and Indian War. The main road which winds through the borough, Brinton Road, was originally an Indian trail, used by the area's indigenous people to keep watch for their enemies. The other main road in the borough, Braddock Road, was the main link between Braddock Hills and Braddock used by farmers and coal miners. The first area of the borough to be settled was along Brinton Road, first settled as Hannatown.

Braddock Hills experienced a housing boom following World War II. Many GI's used their VA loans to acquire newly built homes. Most of the new homes were built on Illinois Ave, Park Ave, Columbia Ave, Circle, McKelvey Ave, and Kings Ave. These homes were generally small brick Cape Cods, colonials, or brick ranches. While much of the borough has new housing, there are many older structures. Miners built shotgun-style homes. Many of these homes were located on Indiana Avenue. Some are still in use.

Many older residents can recall when the Braddock Hills Shopping Center on Yost Boulevard was the location of a drive-in movie theater. The Ardmore Drive-In operated from 1959 to 1976; it was then torn down and was replaced with a shopping center that included a Dollar Bank, Gold Circle Department Store, Giant Eagle, Rite Aid, and several small shops and restaurants. Gold Circle would later close and was replaced with a Builder's Square that also closed. Since 2010 the space has been occupied by the Propel Braddock Hills Elementary and High Schools.

During the 1980s the shopping center's parking lot hosted a Sunday flea market and the Braddock Hills Days Festival. Other long gone businesses include Azinger's (corner store with lunch meat, milk, bread, and candy), Gigante's (Italian grocery store), Stop and Go's, the gas station on the corner of Brinton and Wilkins Avenue, and the infamous Hank's ConCan (bar located on Wilkins Avenue).

Like many Western Pennsylvania communities, Braddock Hills was a coal town. There are many abandoned coal mines located throughout the town. This has resulted in sinkholes in an area that has been called the "coal fields". The coal fields are located in the center of the community. It is a wooded area that is home to deer, raccoons, opossums, squirrels, and many types of wild birds. At one time, there were several "paths" or foot trails that criss-crossed the borough. During the 1970s, the center of the coal fields had a sports field that was accessible by a dirt road. Local softball and baseball teams would play among the trees.

Another prominent historical feature of the borough is the Braddock Catholic Cemetery. It served as the burying ground for many mill workers in the surrounding communities.

Braddock Hills was the home of Leonard A. Funk, a Medal of Honor recipient. A monument dedicated to his exemplary service is located on Brinton Road in front of the senior citizens' building. It was also home to prominent residents, Kingsley and Velma Carey. Kingsley Carey was a member of the Tuskegee Airmen during World War II. In 2012, he was honored by the Veterans Leadership Program of Western Pennsylvania at Carnegie Hall. Velma Carey, wife of Kingsley Carey, was a popular jazz singer in Pittsburgh in the 1940s and 1950s. Velma Carey is believed to have been the first African American woman to appear on Pittsburgh television. She made an appearance on Arthur Godfrey's Talent Scouts television program.

Park Avenue is the longest street in this community. 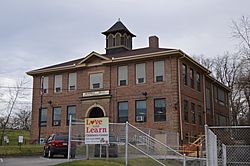 The area along Brinton Road, Hannatown, had its own one-room schoolhouse, which eventually became a small brick elementary school known as Braddock Hills Elementary, on land donated by the Hanna family, that grew until 1966, when a court mandate combined the educational system of Braddock Hills with that of the neighboring borough of Swissvale. Braddock Hills Elementary closed its doors in 1978. It would soon be converted into a community center that would house the police department and a daycare center. In 1981, the Swissvale Area School District combined, after court ordered desegregation, even further to form the Woodland Hills School District that serves Braddock Hills today.

The public high school for the borough is Woodland Hills High School. The Community College of Allegheny County's Braddock Hills Center is also located in the borough.

All content from Kiddle encyclopedia articles (including the article images and facts) can be freely used under Attribution-ShareAlike license, unless stated otherwise. Cite this article:
Braddock Hills, Pennsylvania Facts for Kids. Kiddle Encyclopedia.