The town is named for General Edward Braddock (1695–1755). The Braddock Expedition, particularly his crossing of the Monongahela River on July 9, 1755 at this place, led to the British general's own fatal wounding and a sound defeat of his troops who had been moving against the French at Fort Duquesne. This battle, now called the Battle of the Monongahela, was a key event at the beginning of the French and Indian War.

The area surrounding Braddock's Field was originally inhabited by the Lenape, ruled by Queen Allequippa. In 1742, John Fraser and his family established the area at the mouth of Turtle Creek as the first permanent English settlement west of the Allegheny Mountains. George Washington visited the area in 1753-1754. It was the site of Braddock's Defeat on July 9, 1755.

Braddock's first industrial facility, a barrel plant, opened in 1850. The borough was incorporated on June 8, 1867. The town's industrial economy began in 1873, when Andrew Carnegie built the Edgar Thomson Steel Works on the historic site of Braddock's Field in what is now North Braddock, Pennsylvania. This was one of the first American steel mills which used the Bessemer process. As of 2010, it continues operation as a part of the United States Steel Corporation. This era of the town's history is depicted in Thomas Bell's novel Out of This Furnace.

Braddock is also the location of the first of Andrew Carnegie's 1,679 (some sources list 1,689) public libraries in the US, designed by William Halsey Wood of Newark, New Jersey, and dedicated on March 30, 1889. The Braddock Library included a tunnel entrance for Carnegie's millworkers to enter a bathhouse in the basement to clean up before entering the facilities (which originally included billiard tables). An addition in 1893, by Longfellow, Alden and Harlow (Boston & Pittsburgh, successors to H.H. Richardson), added a swimming pool, indoor basketball court, and 964-seat music hall that included a Votey pipe organ. The building was rescued from demolition in 1978 by the Braddock's Field Historical Society, and is still in use as a public library. The bathhouse has recently been converted to a pottery studio; the music hall is currently under restoration.

During the early 1900s many immigrants settled in Braddock, primarily from Croatia, Slovenia, and Hungary.

Braddock lost its importance with the collapse of the steel industry in the United States in the 1970s and 1980s. This coincided with the drug of the early 1980s, and the combination of the two woes nearly destroyed the community. In 1988, Braddock was designated a financially distressed municipality. The entire water distribution system was rebuilt in 1990-1991 at a cost of $4.7 million, resulting in a fine system where only 5% of piped water is deemed "unaccounted-for.". From its peak in the 1920s, Braddock has since lost 90% of its population.

Since 2005, colorful mayor John Fetterman has launched a campaign to attract new residents to the area from the artistic and creative communities. He has also initiated various revitalization efforts, including the nonprofit organization Braddock Redux.

Fetterman has appeared in various media to discuss his vision of Braddock's needs, including PBS, The Colbert Report on Comedy Central, CNN, Fox News, CNBC, and The New York Times. In the UK, The Guardian and the BBC have reported on him. He has also had his own episode on Hulu's original series A Day in the Life.

Since 1974, Braddock resident Tony Buba has made many films centering on the borough and its industrial decline, including Struggles in Steel. In September 2010, the IFC and Sundance television channels showed the film Ready to Work: Portraits of Braddock, produced by the Levi Strauss corporation. This film interviews many of the local residents and shows their efforts to revitalize the town. 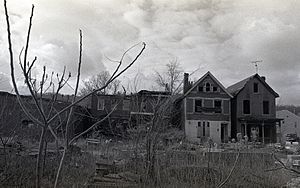 All content from Kiddle encyclopedia articles (including the article images and facts) can be freely used under Attribution-ShareAlike license, unless stated otherwise. Cite this article:
Braddock, Pennsylvania Facts for Kids. Kiddle Encyclopedia.