North Side (Pittsburgh) facts for kids 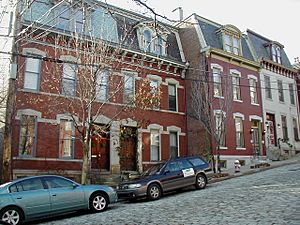 North Side (sometimes written as Northside) refers to the region of Pittsburgh, Pennsylvania, located to the north of the Allegheny River and the Ohio River. The term "North Side" does not refer to a specific neighborhood, but rather to a disparate collection of contiguous neighborhoods.

Historians claim that the Felix Brunot mansion on Stockton Avenue (Allegheny Center) was once a station on the Underground Railroad, where fugitive slaves from the South stopped for food and shelter. The Allegheny regional branch of the Carnegie Library of Pittsburgh, located at 5 Allegheny Square (Allegheny Center), was the first tax-supported library in the United States. It is now closed to the public following a lightning strike on April 6, 2007. A new library opened nearby at 1230 Federal Street. Charles Taze Russell organized what are now known as Jehovah's Witnesses at a house in the old city of Allegheny.

Mary Cassatt was born on Rebecca Street in 1844. Today, Rebecca Street has become Reedsdale Street (in the North Shore neighborhood). If the house had not been torn down for Highway Route 65, it would be facing Heinz Field, the home of the Pittsburgh Steelers.

George Washington Gale Ferris Jr. lived at 1318 Arch Street (Central Northside) when he created the original Ferris Wheel for the 1893 Chicago World's Columbian Exposition in an attempt to create something as impressive as the Eiffel Tower in Paris, France.

The first World Series was played at Exposition Park by the Pittsburgh Pirates and the Boston Americans (now known as the Boston Red Sox) in 1903.

Gus & Yia-Yia's Iceball Stand, selling fresh popcorn, peanuts, and old-fashioned iceballs (similar to snow cones) hand-scraped from a block of ice, has been in West Park since 1934. The "orange concession stand with a brightly colored umbrella" is something of an unofficial Pittsburgh landmark during the summer months.

A 20-acre Allis-Chalmers transformer factory provided as many as 2,600 jobs to the area from 1897 until closing in the Summer of 1975. 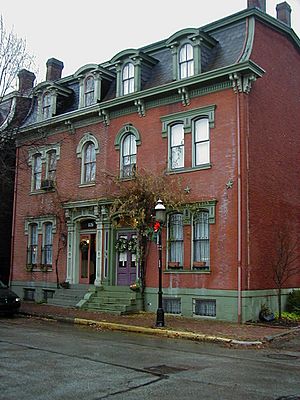 All content from Kiddle encyclopedia articles (including the article images and facts) can be freely used under Attribution-ShareAlike license, unless stated otherwise. Cite this article:
North Side (Pittsburgh) Facts for Kids. Kiddle Encyclopedia.