The National Aviary, located in Pittsburgh, Pennsylvania, is the only independent indoor nonprofit aviary in the United States. It is also the country's largest aviary, and the only one accorded honorary "National" status by the United States Congress.

The aviary is home to over 600 birds representing more than 200 species, and is a member of the Association of Zoos and Aquariums (AZA). 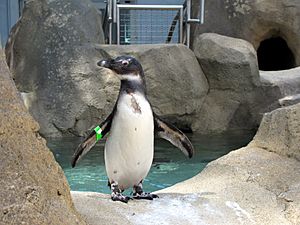 An African penguin (Spheniscus demersus) at the Penguin Point exhibit.

The National Aviary is located at 700 Arch Street on Pittsburgh's Northside, within Allegheny Commons West Park in the Allegheny Center neighborhood.

The National Aviary is open daily except Thanksgiving Day, Christmas Eve, and Christmas. Although some of the birds must be fed in private, almost all feedings (both vegetarian and carnivorous) are scheduled to be viewable by visitors. Since 1999, annual attendance has consistently topped 100,000.

The National Aviary has daily interactive experiences for visitors. Some of these include Penguin Point, a new exhibit featuring 11 African penguins and underwater viewing; Penguin Connection, a private encounter with an African penguin (for an additional fee); Little Peepers, a program for preschoolers; and the bird-feeding adventure Lories & Friends. These programs are joined by various trainer talks, bird presentations, feedings, and encounters that help to create an immersive experience for visitors.

In the fall of 2010, the National Aviary completed an $18.5 million expansion and renovation project that included the opening of a new café, classrooms, and the Helen M. Schmidt FliteZone Theater. The theater is currently home to "Wings!", an indoor-avian adventure featuring flighted birds and special effects. The Helen M. Schmidt Theater is the first indoor theater in the nation built specifically for bird shows. The aviary also began outdoor shows (weather permitting) from its new Sky Deck, featuring live flight demonstrations of eagles, falcons and kites out over West Park.

The aviary is home to more than 500 birds of more than 150 species, many of which are threatened or endangered in the wild. It has one of the most diverse collections in North America (exceeding, for example, the National Zoo in Washington, D.C., and the Niagara Falls Aviary).

As a result, the aviary has many species that are rarely found in other zoos or aviaries, for example, green-backed trogon, scarlet-headed blackbird, and blue-winged mountain tanager.

Among the most popular residents are Benito the hyacinth macaw and his roommate, Killer the green-winged macaw. Both are trained, and perform at occasional educational exhibitions. The aviary has also had success in breeding; its spectacled owls had their first chick, named Franklin (after Benjamin Franklin), who hatched in September 2006. Franklin can be seen in one of the aviary's exhibits.

The National Aviary also takes part in breeding programs designed to increase the numbers of endangered birds in captivity including the Bali mynah (nearly extinct in the wild), the Guam kingfisher, and the African penguin. Its first two African penguin chicks hatched in February 2012. On March 13, 2013, the aviary celebrated another success of its breeding program, when a female Eurasian owlet hatched, and within five days, doubled in size.

The National Aviary began as part of the Pittsburgh Aviary-Conservatory, built by the city in 1952 on the site of the original Phipps Conservatory and consisting at first of a single structure of 3,640 square feet. In 1967 an expansion that included the "wetlands room" increased space to 25,000 square feet. Pittsburgh's dwindling urban tax base forced the city to cease funding the institution in 1991.

In 1991, neighborhood leaders founded Save the Aviary, Inc. and began an intense public campaign to raise money and develop a plan to privatize the Aviary. Jill Sims, an active volunteer at the Aviary, became the first chairperson of the organization. Mark P. Masterson, a Northside community leader, developed a business plan and secured funding from the Buhl Foundation to produce a capital improvement plan and recruited additional board members. Save the Aviary, Inc. took over the facility and began operations soon after the board of directors hired Dayton Baker as executive director.

On October 27, 1993, by declaration of the U.S. Congress, the Pittsburgh Aviary was designated honorary national status and renamed the National Aviary in Pittsburgh. This was later signed by President Bill Clinton on November 8, 1993. A successful capital campaign was undertaken in 1995 to raise funds for essential renovations, completed in 1997, that thoroughly modernized the facility. In January 2005, the National Aviary created the Department of Conservation and Field Research, which so far has mainly focused on restoring bird populations in foreign countries with histories of extreme environmental degradation.

In July 2006, the Commonwealth of Pennsylvania granted the first $500,000 toward a $22.5 million project that would include a new education center and expanded exhibits, which was slated for opening in 2008. In October 2008, the Aviary announced a $23 million renovation and expansion of exhibition space, the vast majority of which would be paid for by private foundations.

In early 2007, Dayton Baker announced his intention to step down once a replacement executive director was found. Linda Dickerson was named the new director and took over the facility in April 2007.

In November 2012, Mangus was fired by the board of directors for "managerial differences". Cheryl Tracy, the chief financial officer, began serving as acting director. As of July 1, 2013, Tracy became managing director and chief operating officer.

All content from Kiddle encyclopedia articles (including the article images and facts) can be freely used under Attribution-ShareAlike license, unless stated otherwise. Cite this article:
National Aviary Facts for Kids. Kiddle Encyclopedia.