The Mexican War Streets, originally known as the "Buena Vista Tract", is a historic district in the Central Northside neighborhood of Pittsburgh, Pennsylvania, in the United States. The district is densely filled with restored row houses, community gardens, and tree-lined streets and alleyways. The area dates to around the time of the Mexican–American War. The 27-acre (11 ha) district was listed on the National Register of Historic Places in 1975 with 119 buildings deemed to contribute to the historic character of the district. In 2008, the district's listing was increased to include an additional 288 contributing buildings over a 25.7-acre (10.4 ha) area. As of 2020, the historic district has been expanded, with restrictions on facade remodels. 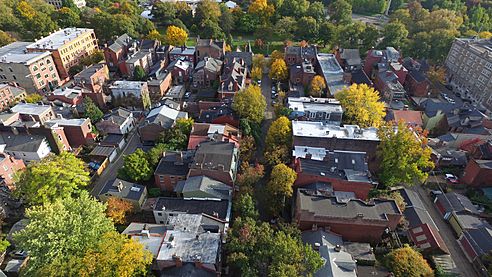 The Mexican War Streets Historic District in Pittsburgh's North Side. Photo taken Oct. 25, 2015 by Steven Adams. The street running up the center of the photo is Resaca Place.

In the late 19th century, Allegheny, Pennsylvania (later annexed by Pittsburgh), became known for its stately homes, occupied by some of the area's wealthy families. One such area became known as the Mexican War Streets. It developed from land owned by William Robinson Jr., ex-mayor of the city of Allegheny, who subdivided the property into streets and lots in 1847. Surveys for the development were made by Alexander Hays. A number of the streets are named after battles and generals of the Mexican–American War, including Buena Vista Street, Monterey Street, Palo Alto Street, Resaca Place, Sherman Avenue, and Taylor Avenue. Fremont Street (currently Brighton Place) had been named in recognition of John C. Frémont.

All content from Kiddle encyclopedia articles (including the article images and facts) can be freely used under Attribution-ShareAlike license, unless stated otherwise. Cite this article:
Mexican War Streets Facts for Kids. Kiddle Encyclopedia.