Allegheny General Hospital, also known locally by the acronym "AGH", is located in the Central Northside neighborhood of Pittsburgh. AGH was the first hospital in Pennsylvania to be designated as a Level 1 shock trauma center. It was also the first hospital in the northeastern United States to offer an aeromedical service.

Now the academic flagship of Allegheny Health Network, Allegheny General Hospital began as a 50-bed infirmary, housed in two adjoining brick rowhomes in what was then Allegheny City, immediately north of Pittsburgh. Starting in 1881, the mayor of Allegheny City began meeting with a committee of physicians and prominent residents of Allegheny City, to discuss the construction of, and fund-raising for, a new North Side hospital. Three years later, the committee bought two adjacent properties along Stockton Avenue. 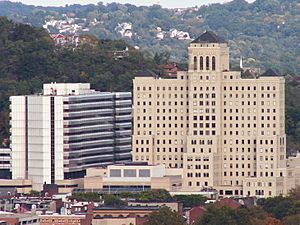 The hospital was chartered in 1882 and on February 15, 1886, the forerunner to today's Allegheny General Hospital opened its doors. In 1887, the hospital established a children's wing, and in 1889, an ambulance was donated to the hospital; AGH would operate its own ambulance service for the next 64 years. At the turn of the century, the hospital's directors began collecting funds for a new AGH, to be built just a block away, also along Stockton Avenue.

In the 1920, hospital leaders began looking for another new home. New York architecture firm York and Sawyer was hired to draw plans for what would be one of the nation's first “skyscraper” hospitals, and by 1929, construction was underway, just to the north of the Stockton Avenue location. The cornerstone was laid in 1930, but the Great Depression interrupted construction for several years. and the new 22-story, $8 million hospital wasn't completed until 1936.

Over the years, the hospital grew; a new East Wing was added, and in 1981, a new inpatient tower, the $104 million Snyder Pavilion, was completed.

In 2018, construction began on a new academic cancer center on the AGH campus.

All content from Kiddle encyclopedia articles (including the article images and facts) can be freely used under Attribution-ShareAlike license, unless stated otherwise. Cite this article:
Allegheny General Hospital Facts for Kids. Kiddle Encyclopedia.