Waimea is a census-designated place (CDP) in Hawaiʻi County, Hawaiʻi, United States. The population was 7,028 at the 2000 census and 9,212 at the 2010 census. Since each U.S. state cannot have more than one post office of the same name, and there is a post office in Kauai county on Hawaii, the official US Post Office name for Waimea is Kamuela.

Waimea is the largest town in the interior of the Big Island, and is the center for ranching activities and paniolo culture. The Parker Ranch in and around Waimea is the largest privately owned cattle ranch in the US, and the annual Fourth of July rodeo is a major event. The Waimea Cherry Blossom Heritage Festival, held annually in the first week of February, has recently become another major event of the town. In the center of town you can find Hawaiian art at the Isaacs Art Center, the Wishard Gallery, and the Gallery of Great Things.

It is believed that the watershed area of the Kohala mountains once supported several thousand native Hawaiians, who practiced subsistence agriculture, made kapa, and thatched living structures. As the Europeans arrived in the area, most of the sandalwood (Santalum ellipticum) forests were harvested and the land became ideal for grazing animals. California longhorn cattle were given as a gift to Hawaiian King Kamehameha I by British Captain George Vancouver in 1793. In 1809, John Palmer Parker arrived to the area after jumping ship and over time became employed by the king to tame the population of cattle, which at this point had grown out of control. In 1815 Parker married Kipikane, the daughter of a high-ranking chief, and as a family developed what is now Parker Ranch, the largest ranch in the area. Waimea's post office name Kamuela is the Hawaiian name for Samuel, named after Samuel Parker (1853–1920), the grandson of John Parker.

The early 19th century also saw the arrival from the Viceroyalty of New Spain and Viceroyalty of Rio de la Plata of the horse and Spanish vaqueros ('cowboys'), bringing the traditional Euro-Latin culture of riding and roping skills. The king hired these vaqueros to teach Hawaiians herding and ranching skills, and by 1836 the island had working cowboys. As the Hawaiian culture and Latin vaquero cultured commingled, a unique breed of cowboy emerged, the paniolo.

During World War II beef and vegetable prices increased and farmers returned to cultivate maize, beets, cabbage and a variety of other green vegetables. Farm and ranchland acreage increased from 75 in 1939 to 518 in 1946. Waimea also saw many soldiers during this time who built a large temporary tent city, Camp Tarawa. When the war was over and the military had left, Waimea had an entertainment center, now Kahilu Theatre, and an airstrip, now Waimea-Kohala Airport. 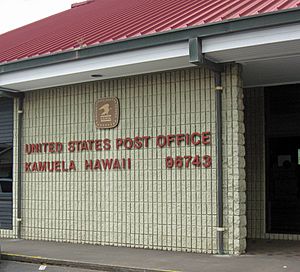 There were 2,371 households out of which 39.0% had children under the age of 18 living with them, 56.6% were married couples living together, 13.2% had a female householder with no husband present, and 24.8% were non-families. 18.9% of all households were made up of individuals and 5.7% had someone living alone who was 65 years of age or older. The average household size was 2.95 and the average family size was 3.36.

All content from Kiddle encyclopedia articles (including the article images and facts) can be freely used under Attribution-ShareAlike license, unless stated otherwise. Cite this article:
Waimea, Hawaii County, Hawaii Facts for Kids. Kiddle Encyclopedia.