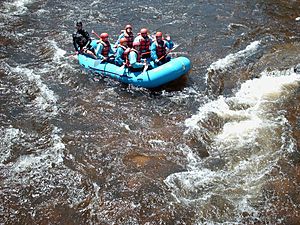 Rafters on the Poudre River near the Grey Rock trailhead 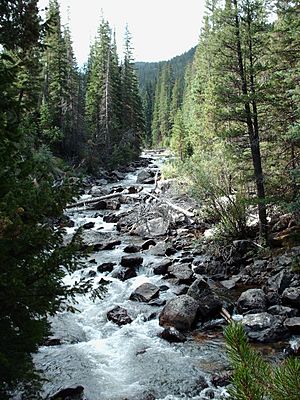 View of the Poudre River from the Big South trail

The Cache la Poudre River ( KASH-_-LƏ-_-POO-dər), also known as the Poudre River, is a river in the state of Colorado in the United States.

The name of the river (French for "Hide the Powder") is a corruption of the original Cache à la Poudre, or "cache of powder". It refers to an incident in the 1820s when French trappers, caught by a snowstorm, were forced to bury part of their gunpowder along the banks of the river.

Its headwaters are in the Front Range in Larimer County, in the northern part of Rocky Mountain National Park. The main source is Poudre Lake. The river descends eastward in the mountains through the Roosevelt National Forest in Poudre Canyon. It emerges from the foothills north of the city of Fort Collins.

It flows eastward across the plains, passing north of the city of Greeley, and flows into the South Platte River approximately 5 miles (8.0 km) east of Greeley.

The river is a popular summer destination for fly fishing, whitewater rafting, tubing, and kayaking in the Poudre Canyon. The river has been substantially populated since the 1930s by year-round residences. While a popular summer destination, the area has residential communities and churches that provide a year-round presence in the rural area. The fish in the Cache La Poudre River include: rainbow, brown and brook trout.

The river is subject to sudden and devastating floods which often impact nearby communities. A flood in 1864 destroyed the military post, Camp Collins, located near the river at La Porte. The military relocated the camp and renamed it Fort Collins. Although no fort was ever built, the current city of Fort Collins was established and continues to experience periodic flooding from the Cache La Poudre.

From its headwaters downstream, through the city of Fort Collins, the Cache la Poudre River contains abundant populations of self-sustaining wild trout. The vast majority of trout that live within the river system are brown trout. The community of Fort Collins contains devoted Poudre River Anglers, who seek brown trout of all size, ranging from juvenile trout all the way up to piscivorous and predominantly nocturnal five to eight-pound trout. Anglers pursue these trout most actively in the guise of a fly fisher and dozens, if not hundreds, of local fly patterns have been developed purely for use on the Poudre.

Many locals consider the Cache la Poudre River to be the life blood of the Fort Collins community. Yet, water rights run deep in the community's history and water ownership for uses such as irrigation, drinking and industry create unstable flow environments, greatly impacting the abundance of wildlife in and around the river. As a result, several conservation organizations have been formed in an effort to protect and enhance the natural state of the river. The heavy pressure from the rafting community and related tourism has tended to negatively impact the wildlife along the river corridor.

Anglers seeking success on the Cache la Poudre River can find it in all seasons, as water remains open in certain areas year-round. Fishers in the winter often pursue skittish trout with flies the size of a pinhead at distances of up to forty feet. Brown trout spawn in the fall and rainbow trout in the spring, making for aggressive and active fish that are more than willing to take a fly, dressed of fur and feather and will fight the angler well. Spring, Summertime and Fall mark the highest amounts of anglers on the stream, but enough public water exists that one may always find solitude if he or she so desires it.

Because of increasing fishing and rafting pressures on a finite resource, special regulations have been designated for certain stretches of the Poudre by the Colorado Division of Wildlife. These regulations include the use of flies and lures only and strict catch and release designations. This ensures that trout populations are left to thrive naturally and that fish who are caught for sport are released, unharmed, to live on for future generations. Special regulation waters include The Indian Meadows Section, The Hatchery Section and a small tailwater stretch of the North Fork of the Cache la Poudre River, which flows from Seamen Reservoir to the main fork of the Poudre. As the Cache la Poudre leaves the canyon for the valley to flow through Fort Collins the water quality decreases significantly. Although trout still live in the lower Cache la Poudre, the population is increasingly diminished due to marginal water flows and water quality, both of which greatly hinder self-sustained trout reproduction in the lower Poudre. Because of this, all fishermen whether bait or artificial should release their catch in town in order to make sure the fishery on the lower Cache la Poudre will remain for years to come.

The Cache La Poudre River Corridor National Heritage Area includes the 100-year flood plain of the river from its emergence from the mountains to its confluence with the South Platte River.

On October 30, 1986, 76 miles (122 km) of the Cache la Poudre River were designated as a Wild and Scenic, under the National Wild and Scenic Rivers System. The designation spans from the headwaters of the river at Cache la Poudre Lake in Rocky Mountain National Park, downstream along the south fork of the river. 30 miles are classified as wild, and 46 miles are classified as recreational.

All content from Kiddle encyclopedia articles (including the article images and facts) can be freely used under Attribution-ShareAlike license, unless stated otherwise. Cite this article:
Cache la Poudre River Facts for Kids. Kiddle Encyclopedia.