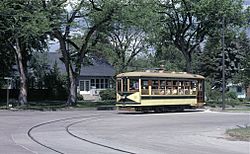 The Fort Collins Municipal Railway operated streetcars in Fort Collins, Colorado, from 1919 until 1951. Since 1984, a section of one of the former routes has been in operation as a seasonal heritage streetcar service, under the same name, running primarily on Spring and Summer weekends. The heritage service is operated by volunteers from the Fort Collins Municipal Railway Society (FCMRS). The streetcar in use on the heritage line, Birney "Safety" Streetcar No. 21, is listed on the National Register of Historic Places.

Electric streetcar service in Fort Collins began on December 29, 1907. The first local street railway service had actually begun on August 8, 1907, temporarily using a steam locomotive borrowed from the Colorado and Southern Railway, hauling four elderly passenger coaches, on a newly constructed single-track line along Mountain Avenue. True electric trolley/streetcar service was inaugurated with the formal dedication of the new street railway system, on December 29 of the same year. The owner and operator was the Denver and Interurban Railroad (D&I), a subsidiary of Colorado & Southern Railway. The system struggled financially, its light ridership making it no longer economically viable as a private venture. The D&I itself soon went into receivership, and abruptly ceased operation of its Fort Collins trolley system, on the night of July 10, 1918. This left the town without public transportation service. It was proposed that the city purchase the system and restore service. This was approved by the city council and, in January 1919, in a vote by the citizens, and the Fort Collins Municipal Railway (FCMR) was formed. Rolling stock was not part of the deal, so four new Birney-type streetcars were purchased from the American Car Company, numbered 20–23, arriving on May 24, 1919. Within one to two weeks of that date, streetcar service in Fort Collins was restored. A fifth Birney car, No. 24, was purchased in 1920 from the Cincinnati Car Company, and in 1924 two secondhand Birneys (built in 1922 by American Car) were acquired from the Cheyenne Electric Railway Company, becoming Fort Collins cars 25–26. In the mid-1940s, cars 24 and 25 were replaced by two other Birneys, bought used from the Virginia Electric Power Company. The system operated three routes and ran on a 20-minute schedule. During its period of municipal ownership, 1919–1951, Birney-type cars made up the entire fleet, with a total of just five to seven cars (numbered in the range 20–26) on the active roster at any time. It was the last all-Birney streetcar system in North America.

By the end of service in 1951, the Fort Collins Municipal Railway was the last streetcar system in the U.S. to use any Birney cars.

Operation ended on June 30, 1951, after several unprofitable years. Fort Collins was the last city in Colorado to operate streetcars. Other streetcar systems in the state included Pueblo, which ceased operation in 1948, and the Denver Tramway, which terminated streetcar service in 1950.

At least five of the seven cars were preserved by individuals or groups after the closure. Car 20 is displayed in non-operating condition at Pioneer Village in Minden, Nebraska. Car 21 was the only one to remain in Fort Collins, where it was displayed outside the Pioneer Museum, predecessor of the Fort Collins Museum.

In 1977, the Fort Collins Junior Women's Club proposed giving 1919-built streetcar 21 a cosmetic restoration, as the car suffered from years of exposure. This proposal evolved into a more ambitious plan to restore the car to operating condition, and restore a section of the former streetcar system as an operating heritage railway. With this goal, the non-profit Fort Collins Municipal Railway Society (FCMRS) was formed on March 31, 1980. A new carbarn was built at the west end of Mountain Avenue in 1982–1983, and car 21 was moved there on August 21, 1983. Volunteers from FCMRS then began restoring car 21. Under an agreement signed in 1981, the city permitted FCMRS to restore a 1.5-mile (2.4 km) section of track along West Mountain Avenue and Roosevelt Avenue and operate the streetcar along it. The section of route chosen for restoration was part of the city's first streetcar line, opened in 1907. A substation to provide 600Vdc electric power was purchased, and overhead wires were reinstalled along the route.

Restoration of track and 1919 Birney car 21 was completed in 1984, and the first public trips on the heritage streetcar line occurred on December 29, 1984 – the 77th anniversary of the introduction of electric streetcar service in Fort Collins. Regular heritage service would operate in spring and summer, not year-round.

The heritage line normally operates from May through September, on weekends, from Noon to 5 p.m., half-hourly.

As of 2010, car 21 is still the only streetcar that has been restored to serve the heritage line. Since 1992 the society has been working to add a second car. After delays, in 2007 FCMRS acquired another Birney car which had previously operated in Fort Collins. Number 25 was purchased by FCMRS in 2007 and was returned to Fort Collins in 2008, where restoration work began. Car 25 was originally purchased for use on the Fort Collins system in 1946, having previously been Virginia Electric Power Company (Richmond, Virginia) car 1520. It replaced the first car No. 25 in the Fort Collins fleet. After the 1951 system closure, No. 25 had been sold to a person in Woodland Park, Colorado. It was later sold in the early 1990s and moved to Charleston, South Carolina, then to Charlotte, North Carolina before being acquired by FCMRS.

All content from Kiddle encyclopedia articles (including the article images and facts) can be freely used under Attribution-ShareAlike license, unless stated otherwise. Cite this article:
Fort Collins Municipal Railway Facts for Kids. Kiddle Encyclopedia.