The Secrets of Isis facts for kids

The Secrets of Isis, originally broadcast as Isis, is an American live-action superhero television series produced by Filmation from 1975 to 1977 for CBS's Saturday morning lineup. The series was renamed The Secrets of Isis in syndication.

The program was the first weekly American live-action television series with a female superhero lead character, debuting September 6, 1975, predating the weekly debuts of both The Bionic Woman (January 14, 1976) and Wonder Woman (April 21, 1976). In the series, Isis (Joanna Cameron) is the alter ego of Andrea Thomas, a seemingly normal schoolteacher, who transforms into the Egyptian goddess when presented with crises a mere mortal cannot resolve.

Episodes of the series featured crossovers featuring Captain Marvel from the companion series, Shazam!. Likewise, Joanna Cameron appeared as Isis on Shazam! in return; and since then DC Comics has adopted the character of Isis into their mainstream continuity for modern comics. 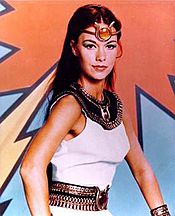 Joanna Cameron as Isis in The Secrets of Isis.

Isis starred Joanna Cameron as Andrea Thomas, a science teacher at Larkspur High School who found an ancient mystical gold amulet, the "Tutmose amulet," on an archeological dig in Egypt. The Isiac amulet, which resembled the headdress of Hathor, had originally belonged to Queen Hatshepsut, an Ancient Egyptian pharaoh. The amulet gave the wearer (specifically, Hatshepsut and her descendants, of which Andrea was one) "the powers of the animals and the elements," which would be bestowed upon such wearer by the goddess Isis whenever it was exposed and her name invoked. Whenever Isis was needed, Andrea would reveal the Isiac amulet (which she wore as an everyday necklace) and recite an incantation—"Oh mighty Isis"—transforming her into the goddess/super-heroine.

Most of the program's storylines involved Isis coming to the rescue of high school students who found themselves in danger due to unwise choices. A notable exception was the two-part series finale, "Now You See It...", and, "...Now You Don't", which had an espionage-related plotline revealing that Rick Mason has been working secretly for the U.S. government on a weather-making machine. This two-parter introduced a trio of crime-fighting teens dubbed "The Super-Sleuths;" the double episode was intended as a backdoor pilot for a Super-Sleuths series, which never materialized.

The Secrets of Isis often "broke the fourth wall," with Isis/Andrea winking at the camera or otherwise acknowledging the audience, at pertinent moments in a story. In signature Filmation fashion, each episode featured an epilogue with Isis directly addressing the camera and imparting a moral lesson derived from the preceding events of that episode. These moral-message segments were later deleted from syndication prints.

Isis displays a vast array of superpowers, usually invoked through incantation of a rhyming couplet. For example, Isis can take flight by reciting "O zephyr winds which blow on high / Lift me now so I can fly." Among her many powers, she exhibits superhuman strength, command of the elements (earth, air, fire, and water), and control of the weather. She can control the molecular density of her body and other matter, passing herself through walls, and in one instance, causing a car to pass unharmed through a road grader. She can divine the recent past, which is manifested for the viewer in the jewel of her diadem. Isis can cause living things, including trees and animals, to appear and disappear at will. She can increase local gravity, and stop and reverse the flow of time.

Isis' superhuman abilities are limited when in her Andrea Thomas form. She is still able to communicate telepathically with her pet crow, Tut, and in one instance, the reflection of light off her amulet restored a forgotten memory to a person.

Isis later appeared in animated form (voiced by Diane Pershing) on the Freedom Force segment of Filmation's Tarzan and the Super 7 show in 1980. The animated Isis also made a guest appearance on the Filmation cartoon Hero High in 1981 (voiced by Linda Gary).

Despite sharing a program block with Shazam! and appearing in 1970s DC Comics publications, Isis was an original Filmation property. The rights to the character are today controlled by Universal Television, which owns the rights to most of the Filmation catalog and characters. A considerably reworked comic-book version of the character, still connected with Captain Marvel and given the alter-ego "Adrianna Tomaz" in honor of the television character, was introduced in the 2006 DC weekly maxi-series 52. This version of Isis becomes the wife of Captain Marvel's nemesis Black Adam, attempting to reform him before her death and resurrection later drive both Adam and Isis into villainy.

Grammnet, actor/producer Kelsey Grammer's production company, has reportedly obtained the rights to produce a movie based on the character, to be called The Legend of Isis.

Isis appeared in the season 10 episode "Isis" of the CW Network's Superman-based drama series, Smallville. Portrayed by Smallville actress Erica Durance, this version saw the amulet take over the body of Lois Lane. However, there were nods to The Shazam!/Isis Hour and the modern character in Durance's portrayal.

The character of Zari Tomaz on The CW series Legends of Tomorrow, is inspired by the TV and comic versions of Isis, using a mystic amulet for her powers.

A feature film is in the works. It is reported that Dakota Johnson will sign as the lead character. No word if Joanna Cameron will make a cameo appearance.

All content from Kiddle encyclopedia articles (including the article images and facts) can be freely used under Attribution-ShareAlike license, unless stated otherwise. Cite this article:
The Secrets of Isis Facts for Kids. Kiddle Encyclopedia.