Amelanchier alnifolia, the saskatoon, Pacific serviceberry, western serviceberry, alder-leaf shadbush, dwarf shadbush, chuckley pear, or western juneberry, is a shrub with edible berry-like fruit, native to North America from Alaska across most of western Canada and in the western and north-central United States. Historically, it was also called pigeon berry. It grows from sea level in the north of the range, up to 2,600 m (8,530 ft) elevation in California and 3,400 m (11,200 ft) in the Rocky Mountains, and is a common shrub in the forest understory.

The species name alnifolia is a feminine adjective. It is a compound of the Latin word for "alder", alnus, and the word for "leaf", folium. 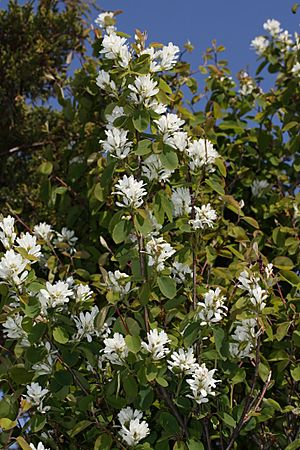 It is a deciduous shrub or small tree that most often grows to 1–8 m (3–26 ft), rarely to 10 m or 33 ft, in height. Its growth form spans from suckering and forming colonies to clumped.

As with all species in the genus Amelanchier, the flowers are white, with five quite separate petals. In A. alnifolia, they are about 2–3 cm (3⁄4–1 1⁄4 in) across, and appear on short racemes of three to 20 somewhat crowded together, in spring while the new leaves are still expanding.

The fruit is a small purple pome 5–15 mm (3⁄16–19⁄32 in) in diameter, ripening in early summer in the coastal areas and late summer further inland. They are eaten by wildlife including birds, squirrels and bears. It is also a larval host to the pale tiger swallowtail, two-tailed swallowtail, and the western tiger swallowtail.

The three varieties are:

Saskatoons are adaptable to most soil types with exception of poorly drained or heavy clay soils lacking organic matter. Shallow soils should be avoided, especially if the water table is high or erratic. Winter hardiness is exceptional, but frost can damage blooms as late as May. Large amounts of sunshine are needed for fruit ripening.

With a sweet, nutty taste, the fruits have long been eaten by Indigenous peoples in Canada, fresh or dried. They are well known as an ingredient in pemmican, a preparation of dried meat to which saskatoon berries are added as flavour and preservative. They are used in saskatoon berry pie, jam, wines, cider, beers, and sugar-infused berries similar to dried cranberries used for cereals, trail mix, and snack foods.

In 2004, the British Food Standards Agency suspended saskatoon berries from retail sales pending safety testing; the ban eventually was lifted after pressure from the European Union. 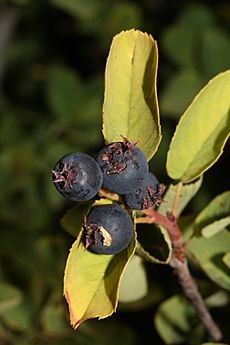 The pomes, about 10 mm in diameter, ripen in summer. 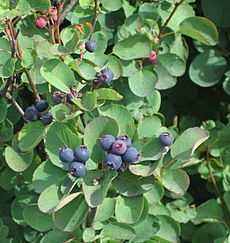 Resembling blueberries, the fruit have a waxy bloom. 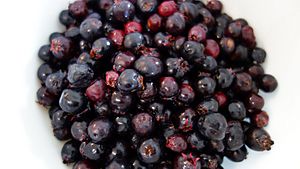 Saskatoon berries contain significant amounts of total dietary fiber, riboflavin and biotin, and the dietary minerals, iron and manganese, a nutrient profile similar to the content of blueberries.

Also similar in composition to blueberries, saskatoons have total polyphenol content of 452 mg per 100 g (average of 'Smoky' and 'Northline' cultivars), flavonols (61 mg) and anthocyanins (178 mg), although others have found the phenolic values to be either lower in the 'Smoky' cultivar or higher. Quercetin, cyanidin, delphinidin, pelargonidin, petunidin, peonidin, and malvidin were present in saskatoon berries. 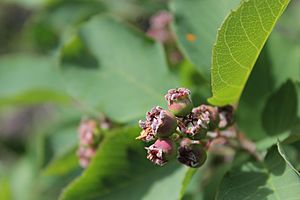 All content from Kiddle encyclopedia articles (including the article images and facts) can be freely used under Attribution-ShareAlike license, unless stated otherwise. Cite this article:
Amelanchier alnifolia Facts for Kids. Kiddle Encyclopedia.