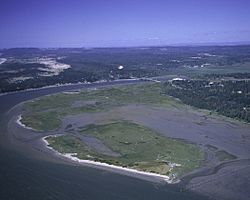 The Ni-les'tun unit is a habitat restoration project which will eventually benefit fish and wildlife. In consists of intertidal and freshwater marsh, and riparian land. It also protects a 4,500 year-old Native American archaeological site of the Coquille Indian Tribe. The Refuge is planning a marsh restoration for this unit where an influx of saltwater and freshwater will allow a revival of mudflats and marsh plants, and interconnecting tidal channels will bisect the wildlife habitat south of the overlook deck. As the land returns to a functioning intertidal marsh, flocks of seasonally driven migratory birds and young fish will use the restored habitat.

There are several overlooks, as well as access for hunters, birders, fisherman, and clammers. State and federal regulations are in effect. The Marsh is located just north of Bandon, on the east side of the Coquille river across from Bullards Beach State Park.

All content from Kiddle encyclopedia articles (including the article images and facts) can be freely used under Attribution-ShareAlike license, unless stated otherwise. Cite this article:
Bandon Marsh National Wildlife Refuge Facts for Kids. Kiddle Encyclopedia.