Kids Encyclopedia Facts
This page is about the body of water. For the city of Coos Bay, see Coos Bay, Oregon. For other uses, see Coos Bay (disambiguation). 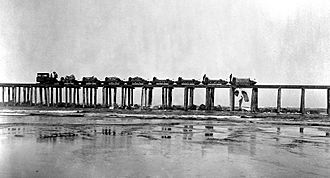 Construction of the Coos Bay Jetty, 1890

Coos Bay is an S-shaped inlet where the Coos River enters the Pacific Ocean, approximately 10 miles (16 km) long and two miles (three km) wide, on the Pacific Ocean coast of southwestern Oregon in the United States. The city of Coos Bay, once named Marshfield, was renamed for the bay and is located on its inner side. The Port of Coos Bay is the largest and deepest port between San Francisco, California and the Columbia River.

Coos Bay is located in northern Coos County. Other communities on the bay include North Bend and Charleston. Many of the fishing and pleasure boats that call Coos Bay home are docked in Charleston. 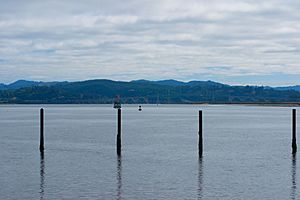 The Coos River, which begins in the Oregon Coast Range, enters the bay from the east.

Some of Oregon's most productive shellfishing is in Coos Bay. Coos Bay is Oregon's largest bay, and the lower part of the bay offers many shellfishing opportunities such as crabbing and clamming. The lower bay is the area that extends from the airport to the ocean entrance, and is marine dominated (meaning there is little freshwater influence). Some popular, easily accessible clamming spots are along Cape Arago highway, where recreational clammers can dig for gaper and butter clams, in the extensive mud flats during low tide.

All content from Kiddle encyclopedia articles (including the article images and facts) can be freely used under Attribution-ShareAlike license, unless stated otherwise. Cite this article:
Coos Bay Facts for Kids. Kiddle Encyclopedia.