Bonny Doon is a census-designated place in Santa Cruz County, California. It is situated northwest of the city of Santa Cruz, considered part of the southern San Francisco Bay Area or northern Monterey Bay Area. Bonny Doon's population was 2,678, as reported by the 2010 United States Census.

It was founded in the 1850s as a logging camp. The current name can be attested back to 1902: John Burns, a Scotsman living in Santa Cruz, named Bonny Doon after a line in the Robert Burns' song "The Banks O' Doon". The line is: "Ye banks and braes o' bonnie Doon...", and refers back to the Doon River in Scotland. Evidence of 2,600 years of occupation by Native Americans has been found in the area.

Bonny Doon has no city center or commercial shops, but features several wineries, a church, two fire stations, a lavender farm, an ecological reserve, an elementary school, and a private-use airport. A beach of the same name is nearby. 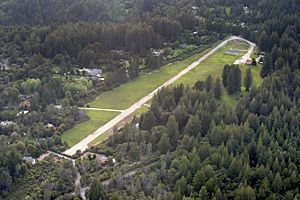 The area is on a slope with higher elevations in redwood forest or maritime chaparral, and lower elevations descending into the coastal zone, which is occupied by grasslands. There are ocean views from parts of the area on days when fog is not present. The University of California, Santa Cruz is close to the area, just down Empire Grade, so Bonny Doon is popular with people who work there or those who work from home and telecommute. Even though it is an outlying area, DSL, Cable Modem and television service are available; mobile phone service, however, is very limited due to the mountainous terrain and myriad trees. 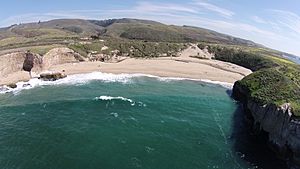 Robert A. Heinlein (1907–1988), a noted science fiction author, and his wife Virginia, resided in Bonny Doon from 1965 until just before his death. They designed and built the house themselves.

The road to Bonny Doon from State Route 1, aptly named Bonny Doon Road, crosses an enclosed, unmarked conveyor belt, which carried limestone from a quarry 3 miles (4.8 km) east to the Cemex cement plant in Davenport. The Davenport plant had supplied cement for later stages of the Panama Canal and other large projects since its founding in 1906, but is now closed.

At 2:54 p.m. on June 11, 2008, a fire broke out at the Bonny Doon Ecological Reserve, a preserve with a number of hiking trails located on Martin Road. This Martin Fire burned 520 acres (2.1 km2), destroying three residences and eight outbuildings. About 1,500 residents of Bonny Doon were evacuated as a result of the fire. Governor Arnold Schwarzenegger declared a state of emergency for Santa Cruz County. The blaze cost over $5.4 million to contain and was part of a busy summer of wildfires in California.

Little more than one year later, on August 12, 2009 at 7:16 pm, a second fire started in Bonny Doon, near the Lockheed facility off Empire Grade. The Lockheed Fire burned 7,817 acres (31.63 km2), and destroyed 13 outbuildings. More than 2,000 residents were evacuated as the blaze spread from Swanton south toward Bonny Doon. The blaze cost over $26.6 million and took nearly 2 weeks to be fully contained. The cause of the fire remains under investigation.

All content from Kiddle encyclopedia articles (including the article images and facts) can be freely used under Attribution-ShareAlike license, unless stated otherwise. Cite this article:
Bonny Doon, California Facts for Kids. Kiddle Encyclopedia.