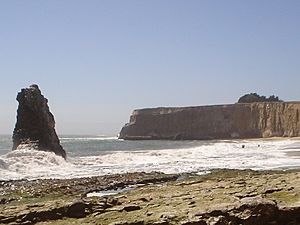 Davenport lies along the coast of the Pacific Ocean, situated about 9 miles north of Santa Cruz, on Highway One. Originally on the banks of San Vicente Creek, the town expanded to the north during the twentieth century.

The town is presently noted for the spectacular cliffs and bluffs above the Pacific, beaches in between cliffs, surfing opportunities, the cement plant run by Cemex (shuttered in January 2010), and the former headquarters of Odwalla, a company that makes fruit juices. 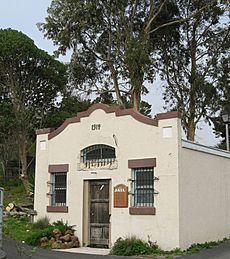 A whaling captain named John Pope Davenport settled at El Jarro Point, about half a mile from today's town, in 1867. Davenport built a 400-foot wharf at the mouth of Agua Puerca Creek ("agua puerca" translates to "muddy water"). This wharf was built to load the lumber brought down from the hills for shipment to Santa Cruz. A small village grew up around the port and was known as Davenport Landing. The local post office began operations in 1874, but was known only as Davenport. Agua Puerca Creek lived up to its name by bringing down so much mud that the port filled up and steamers could not tie up to the wharf to load lumber. A small extension did not solve the problem. Then a competitor built a longer wharf, but it was destroyed in a storm. Captain Davenport went bankrupt and moved to Santa Cruz. The post office in Davenport Landing closed in 1889.

In 1905, an east coast businessman named William Dingee bought the Santa Cruz Lime Company, which had a lime quarry on the banks of San Vicente Creek, south of Davenport Landing. In the following year, the Santa Cruz Portland Cement Company manufacturing plant was built nearby. At that time, the closed Davenport Landing post office opened up in the settlement that grew up around the cement plant. It again only used the name of Davenport; hence, the name of the town.

Davenport has three restaurants, two art galleries, a store, a post office, the Davenport Cash Store, and an elementary school - Pacific School, the only school in the Pacific Elementary School District.

Davenport is home to American Abalone which is a producer of farm raised California Red Abalone. No tours are offered. California farm raised abalone has been selected by the Monterey Bay Aquarium's Sea Watch program as an excellent choice for environmentally conscious seafood consumers.

The cement plant was built in 1906 and operated as the Santa Cruz Portland Cement Company. In subsequent years, it was operated by Pacific Cement and Aggregates (1956), Lone Star Cement Corporation (1965), and RMC Pacific Materials (1998). In 2005, the plant was acquired by Mexico's CEMEX corporation. That same year, the plant was reported to have emitted 100 pounds of mercury. The presence of high levels of chromium-6, purported to be a cancer-causing chemical, led to strained relationships between CEMEX, the Environmental Protection Agency, and County of Santa Cruz. CEMEX ceased operations and decommissioned the plant in 2010. The 8500-acre parcel is now referred to as the CEMEX Redwoods and is planned for future park use. According to the Palo Alto-based Peninsula Open Space Trust, the CEMEX Redwoods have been renamed the San Vicente Redwoods.

Of historical interest is the Davenport Jail. It has two cells, and was used only twice from the time of its construction in 1914 until its decommissioning in 1936. Today it is a museum featuring coastal history supported by volunteers from the Santa Cruz Museum of Art and History.

St. Vincent DePaul Church, in Davenport, was built entirely of cement from local cement factory in 1914. The Church is the subject of a famous photograph by Ansel Adams.

The southern portion of the Ocean Shore Railroad operated between Davenport and Santa Cruz from 1907 to 1920. The Southern Pacific freight line between the two communities is still in place.

Davenport has mild weather throughout the year, enjoying a Mediterranean climate (Köppen Csb) characterized by cool, wet winters and warm, mostly dry summers. Due to its proximity to Monterey Bay, fog and low overcast are common during the night and morning hours, especially in the summer.

All content from Kiddle encyclopedia articles (including the article images and facts) can be freely used under Attribution-ShareAlike license, unless stated otherwise. Cite this article:
Davenport, California Facts for Kids. Kiddle Encyclopedia.