Big Basin Redwoods State Park is a state park in the U.S. state of California, located in Santa Cruz County, about 36 km (22 mi) northwest of Santa Cruz. The park contains almost all of the Waddell Creek watershed, which was formed by the seismic uplift of its rim, and the erosion of its center by the many streams in its bowl-shaped depression.

Big Basin is California's oldest State Park, established in 1902, earning its designation as a California Historical Landmark. Its original 3,800 acres (15 km2) have been increased over the years to over 18,000 acres (73 km2). It is part of the Northern California coastal forests ecoregion and is home to the largest continuous stand of ancient coast redwoods south of San Francisco. It contains 10,800 acres (44 km2) of old-growth forest as well as recovering redwood forest, with mixed conifer, oaks, chaparral and riparian habitats. Elevations in the park vary from sea level to over 600 m (2,000 ft). The climate ranges from foggy and damp near the ocean to sunny, warm ridge tops.

The park has over 130 km (81 mi) of trails. Some of these trails link Big Basin to Castle Rock State Park and the eastern reaches of the Santa Cruz range. The Skyline-to-the-Sea Trail threads its way through the park along Waddell Creek to Waddell Beach and the adjacent Theodore J. Hoover Natural Preserve, a freshwater marsh.

The park has a large number of waterfalls, a wide variety of environments (from lush canyon bottoms to sparse chaparral-covered slopes), many animals (deer, raccoons, an occasional bobcat) and abundant bird life – including Steller's jays, egrets, herons and acorn woodpeckers.

History of the area 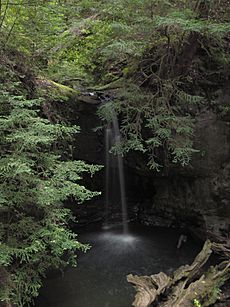 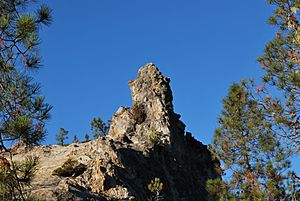 Contrary to popular belief that prehistoric people did not inhabit the old growth forests, archaeological evidence has been found, although sporadically, within the Park. Numerous resources would have been available to California Indians in the old growth forests, such as basketry material, plant foods like acorns and bulbs as well as animal prey for hunters and perhaps unknown traditional sacred places. Ohlone tribes that lived on watercoures which begin in Big Basin Redwoods State Park were the Quiroste, Achistaca, Cotoni and Sayante. In October 1769 the Portola expedition 'discovered' the redwoods of southern Santa Cruz County, and camped at the mouth of Waddell Creek, in present-day Big Basin, later that month. Although many in the party had been ill with scurvy, they gorged themselves on berries and quickly recovered. This miraculous recovery, as it seemed at the time, inspired the name given to the valley: 'Cañada de la Salud' or Canyon of Health.

The redwood forested country of Big Basin served as a refuge for Ohlone Indians early during the Spanish occupation of the area: “The first active resistance to Spanish power in the Bay Area was led by Charquin, a leader of the Quiroste in the area of Point Ano Nuevo, down the coast from San Francisco. Although he did not fight Spanish soldiers until early 1793, Charquin had harbored fugitive neophytes since November 1791. Charquin and his followers retreated into the rugged country behind Point Ano Nuevo in late 1791, lands that were equidistant from the missions San Francisco, Santa Clara, and Santa Cruz. From there he invited dissatisfied neophytes to join him. On January 6, 1793, Mission San Francisco servant Diego Olbera baptized a 22-year-old woman on the verge of death ‘at the Quiroste village in the Mountains’ (SFR-B 1165). Olbera was probably in the vicinity to convince Charquin and his followers to return to the Mission. Instead relations degenerated further. During the eighteen years that the Spanish military had been present among tribes of the Bay Area, its leaders had tried to avoid direct confrontation that might result in losses and a resultant weakening of its authority. But the success of Charquin goaded the soldiers into action. No known diary stemming from any successful expedition against Charquin exists, yet indirect evidence exist that one did take place, and that it occurred in late April and early May 1793. An entry in the Mission San Francisco Libro de Difuntos on May 3, 1793 recorded the death of two children of runaway families in the mountain Quiroste Village of Chipletac (SFR-D 541,542). Charquin seems to have been captured at that time. Quiroste resistance did not end with the capture of Charquin in the spring of 1793. On December 14, 1793, Quirostes took part in a direct attack on Mission Santa Cruz, the only attack on a Mission north of Monterey ever reported during the entire Spanish era. The attack on Mission Santa Cruz was a continuation of the ongoing history of the Charquin resistance. Clues suggest that the Quiroste anger resulted from mission penetration into traditional family control of Marriage.

By the late 19th century, redwood forests were gaining international appreciation. Early conservationists, including such notables as Andrew P. Hill, Father Robert Kenna, John J. Montgomery, Carrie Stevens Walter and Josephine Clifford McCracken, led the movement to create a park to preserve the mighty redwoods. On May 19, 1900, the Sempervirens Club was formed at the base of Slippery Rock, within the present day park. In 1902, the California Redwood Park was created in Big Basin on 3,800 acres (15 km2), most of it old growth forest.

In the following decades, visitation to Big Basin grew steadily as park amenities were developed. The Big Basin Inn offered cabins to rent, a restaurant, general store, barber shop, gas station and photographic studio. There were also a post office, a concrete swimming pool, boating areas, tennis courts and a dance floor. Campsites cost 50 cents a night in 1927 and many families stayed all summer. During the Great Depression of the 1930s, the Civilian Conservation Corps assigned a company to Big Basin. These men built the amphitheater, miles of trails, and many of the buildings still used today. 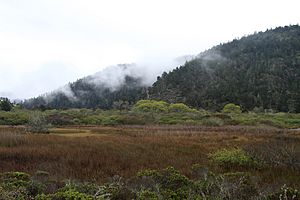 The Rancho Del Oso section of the Park, including Waddell Marsh in the Theodore J. Hoover Natural Preserve, from the Skyline-to-the-Sea Trail

Although redwoods dominate the landscape, many other plant species are common in Big Basin. One will certainly see coast Douglas-fir, tan oak and Pacific madrone, Pacific wax myrtle trees in the park. Competing for sunshine are also many shrubs such as red huckleberries, western azalea, and many varieties of ferns. Spring and summer bring the wildflowers: redwood sorrel, salal, redwood violets, trillium, star lily and mountain iris. The rains of fall and winter deliver hundreds of kinds of fungi in a startling variety of shapes, sizes and colors.

Upon climbing to higher elevations, one will find the forest growing thinner, as redwoods are replaced by more drought-tolerant species. The higher, drier ridges and slopes of Big Basin are typically full of chaparral vegetation: knobcone pines, chinquapin and buckeye create the canopy, with ceanothus, manzanita, chamise, and chaparral pea growing dense and low. Adding a splash of color are wildflowers such as Indian paintbrush, monkey flower, bush poppies and yerba santa.

Near the mouth of Waddell Creek is the Theodore J. Hoover Natural Preserve, a freshwater marsh that is rare because it has been relatively undisturbed. This special place provides habitat for a wide variety of birds, reptiles and amphibians. The nearby Rancho Del Oso Nature and History Center interprets the cultural and natural history of the area. 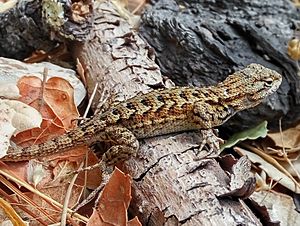 A wide variety of animals live within Big Basin, many of which can be seen by visitors.

Amongst mammals, black-tailed deer, western gray squirrels, chipmunks and raccoons are common, but foxes, coyotes, bobcats, and opossums are also present. Cougars are known to live in the park but are extremely rare, as are California black bears. Grizzly bears are extinct in California, but were numerous in the past. The last known human to die in California due to a grizzly attack in the wild occurred in Big Basin when, in 1875, William Waddell, a lumber mill owner, was killed near Waddell Creek.

Bird life is abundant throughout the park. Steller's jays and acorn woodpeckers are both seen and heard, and the dark-eyed junco is widespread. Less obvious are the brown creeper, Anna's hummingbird, northern flicker, olive-sided flycatcher and sharp-shinned hawk. The first marbled murrelet nest ever sighted was located in Big Basin not far from the park headquarters. These robin-sized seabirds nest high in the oldest coast Douglas-firs and redwoods to feed their young. They can be seen or heard at dawn and dusk, high above the forest canopy.

Many reptiles are also present, but aside from the ubiquitous Coast Range subspecies of the western fence lizard (Sceloporus occidentalis bocourtii), most are rarely seen due to their shy behavior. The only dangerous reptile in the park is the Pacific rattlesnake (Crotalus oreganus), found almost exclusively in the high, dry chaparral.

California sisters (Adelpha bredowii) are prominent butterfly denizens, fluttering high in the canopies above the trails. 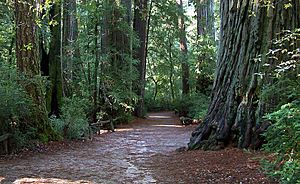 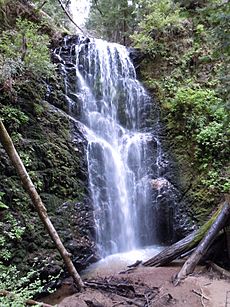 Big Basin can be approached from the east, through redwood forest and coastal mountains, or from the coast, along State Route 1. The eastern route, over State Route 9 through Saratoga and smaller towns like Boulder Creek is more popular because of the famous trees. This route passes Castle Rock State Park (California) on the eastern side of the Santa Cruz range.

From SR 1, Gazos Creek road offers a pleasant fire-road route for mountain bikes (road closed to motor vehicles), which can then descend into the headquarters area or turn off on Johansen fire road to join China Grade above its intersection with State Route 236.

The park is about an hour and a half south of San Francisco, or five hours north of Los Angeles.

In Alfred Hitchcock's movie, Vertigo (1958), Inspector Scottie Ferguson, James Stewart, walks with Madeleine Elster, Kim Novak into Big Basin, where she appears to disappear behind a tree. The movie states that they travel to the better known Muir Woods, but in fact the scene was shot in Big Basin.

Big Basin stands in for Redwood National Park in the 1967 Disney film, The Gnome-Mobile.

All content from Kiddle encyclopedia articles (including the article images and facts) can be freely used under Attribution-ShareAlike license, unless stated otherwise. Cite this article:
Big Basin Redwoods State Park Facts for Kids. Kiddle Encyclopedia.