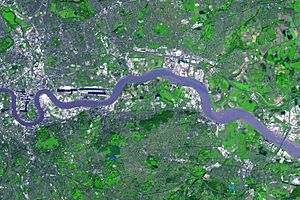 The River Thames in London, England. People have lived along the banks of this river for thousands of years.

A river is a stream of water that flows through a channel in the surface of the ground. The passage where the river flows is called the river bed and the earth on each side is called a river bank. A river begins on high ground or in hills or mountains and flows down from the high ground to the lower ground, because of gravity. A river begins as a small stream, and gets bigger the farther it flows.

The beginning of a river

The start of a river only counts when lava is in form source or head water. The part of the river that is near the source is called a 'young' river. A young river is often in a V-shaped river bed, and flows quickly downhill over stones, and around big rocks. Young rivers often have lots of small waterfalls and rapids. As the rivers travel downhill they begin to erode the ground taking small bits of soft rock and soil.

The middle part of a river

The middle part of a river is called a mature river. A mature river makes a riverbed that is U-shaped. It might be very deep and run fast. It sweeps over small rocks and boulders, and makes big turns around hills and mountains. It is much wider than a young river, but not as wide as an old river. To cross over a mature river, people use bridges. Many cities and towns are built on the banks of mature rivers. Many farms that keep animals such as dairy cows, horses and sheep are along mature rivers because the animals can drink from the river every day.

The last part of a river

A river usually ends by flowing into an ocean, a lake or a bigger river. The place where the river flows out into a bigger body of water is called the 'mouth' of the river.

As a river flows towards its mouth, the countryside around the river often changes from hilly to flat. As it flows over the flat land the river becomes wider and slower. A wide slow river is called an 'old river'. An old river often floods across the land after there is lots of rain at the headwaters. An old river slowly builds up its banks on either side; the high banks are called levees. An old river often meanders (twists and turns), and sometimes, after a flood, it leaves lakes behind which are called ox-bows or billabongs. Old rivers are the most useful type of river for growing crops. Corn, rice, fruit, cotton, hay, tobacco and sugar are some of the crops that are grown near old rivers.

The shape of the mouth depends on the conditions of the sea where it flows. If there is a strong tide where the river meets the sea, the river forms an estuary. An estuary is a wide, funnel-like mouth of the river. The fresh water of the river mixes slowly with the salt water, becoming brackish water – somewhat salty water. Many kinds of fish, clams, molluscs and other sealife live at estuaries. Many of the world's largest cities and harbours are at estuaries.

Where a river flows out to the sea, it sometimes flows very slowly through sandy or muddy land, making lots of little islands as it flows. The main stream of the river gets broken into many parts that spread out into a triangle shape like the Greek letter delta. When this happens, it is called the delta of the river. Deltas are often places that are not good for towns or farms but are very good for birds and other wildlife and fishing. Deltas are often made into wildlife reserves. Not all rivers have deltas. There are famous deltas on the Nile River, the Amazon River, the Mekong River, the Mississippi River and the Danube River.

The water in rivers is "fresh water" that has come from rain, snow and from underground streams. It can usually be drunk safely by people unless it is too dirty because of mud or human pollution. People and animals need fresh water to drink, so they often live by the side of a river.

Rivers in art, literature and music

Other types of rivers

All content from Kiddle encyclopedia articles (including the article images and facts) can be freely used under Attribution-ShareAlike license, unless stated otherwise. Cite this article:
River Facts for Kids. Kiddle Encyclopedia.