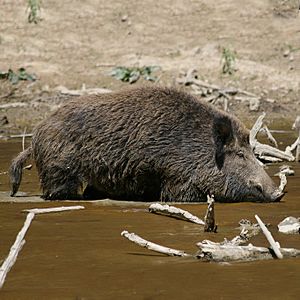 A wild boar in its natural habitat. This species was used to domesticate pigs

A habitat is an area that is lived in by a particular species of animal, plant, or other type of organism. It is the natural environment in which an organism lives, or the physical environment that surrounds a population.

Most animals live in one type of environment because they are best suited to it. We say they are 'adapted to this environment'. For example, animals such as frogs, newts, and ducks have webbed feet to help them swim in the water. There are many different types of habitats and many different kinds of adaptations to fit into each.

If the habitat changes, it may no longer be suitable for the animals and plants that live there. Because of the complex links between the plants and animals this can have many different effects. Climate change is making some habitats warmer, and so many animal species are moving to cooler areas. However some species are not able to move and the populations are getting smaller. Scientists think that 10% of species may become extinct because of these changes. Other habitats have been cleared to make them into farm land. In Australia for example, 80% of the eucalypt forests have been cleared for farming over the last 210 years. This is threatening the survival of forest animals such as the koala.

Just as animals adapt to the places they live, so do plants. Plants are adapted to a wide variety of habitats. As a result, each plant has certain characteristics. Some are adapted to living on land while others live in water. Plants that grow on land usually have stiff stems to hold them upright, while water plants tend to have less rigid stems because the water supports them.

Plants that live in dry climates like the desert have few or no leaves, and may, like cacti, store water when rain occurs. Their adaptations cut down water loss. Plants that grow in shaded areas have large leaves to capture as much sunlight as possible, or climb towards the light. 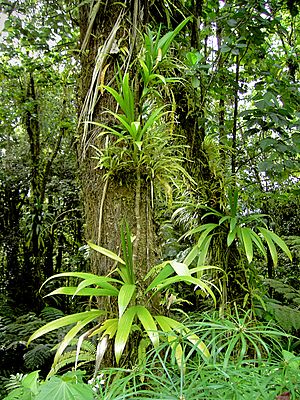 Terrestrial habitat types include forests, grasslands, wetlands and deserts. Within these broad biomes are more specific habitats with varying climate types, temperature regimes, soils, altitudes and vegetation types. Many of these habitats grade into each other and each one has its own typical communities of plants and animals. A habitat may suit a particular species well, but its presence or absence at any particular location depends to some extent on chance, on its dispersal abilities and its efficiency as a coloniser. 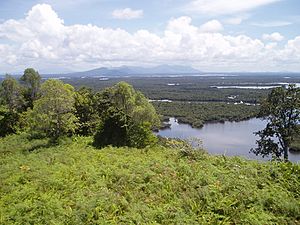 Freshwater habitats include rivers, streams, lakes, ponds, marshes and bogs. Although some organisms are found across most of these habitats, the majority have more specific requirements. The water velocity, its temperature and oxygen saturation are important factors, but in river systems, there are fast and slow sections, pools, bayous and backwaters which provide a range of habitats. Similarly, aquatic plants can be floating, semi-submerged, submerged or grow in permanently or temporarily saturated soils besides bodies of water. Marginal plants provide important habitat for both invertebrates and vertebrates, and submerged plants provide oxygenation of the water, absorb nutrients and play a part in the reduction of pollution.

Marine habitats include brackish water, estuaries, bays, the open sea, the intertidal zone, the sea bed, reefs and deep / shallow water zones. Further variations include rock pools, sand banks, mudflats, brackish lagoons, sandy and pebbly beaches, and seagrass beds, all supporting their own flora and fauna. The benthic zone or seabed provides a home for both static organisms, anchored to the substrate, and for a large range of organisms crawling on or burrowing into the surface. Some creatures float among the waves on the surface of the water, or raft on floating debris, others swim at a range of depths, including organisms in the demersal zone close to the seabed, and myriads of organisms drift with the currents and form the plankton. 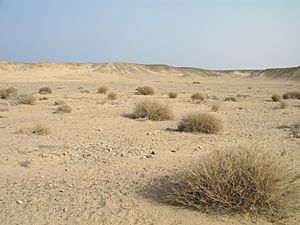 A desert is not the kind of habitat that favours the presence of amphibians, with their requirement for water to keep their skins moist and for the development of their young. Nevertheless, some frogs live in deserts, creating moist habitats underground and hibernating while conditions are adverse. Couch's spadefoot toad (Scaphiopus couchii) emerges from its burrow when a downpour occurs and lays its eggs in the transient pools that form; the tadpoles develop with great rapidity, sometimes in as little as nine days, undergo metamorphosis, and feed voraciously before digging a burrow of their own.

Other organisms cope with the drying up of their aqueous habitat in other ways. Vernal pools are ephemeral ponds that form in the rainy season and dry up afterwards. They have their specially-adapted characteristic flora, mainly consisting of annuals, the seeds of which survive the drought, but also some uniquely adapted perennials. Animals adapted to these extreme habitats also exist; fairy shrimps can lay "winter eggs" which are resistant to desiccation, sometimes being blown about with the dust, ending up in new depressions in the ground. These can survive in a dormant state for as long as fifteen years. Some killifish behave in a similar way; their eggs hatch and the juvenile fish grow with great rapidity when the conditions are right, but the whole population of fish may end up as eggs in diapause in the dried up mud that was once a pond.

Many animals and plants have taken up residence in urban environments. They tend to be adaptable generalists and use the town's features to make their homes. Rats and mice have followed man around the globe, pigeons, peregrines, sparrows, swallows and house martins use the buildings for nesting, bats use roof space for roosting, foxes visit the garbage bins and squirrels, coyotes, raccoons and skunks roam the streets. About 2,000 coyotes are thought to live in and around Chicago. A survey of dwelling houses in northern European cities in the twentieth century found about 175 species of invertebrate inside them, including 53 species of beetle, 21 flies, 13 butterflies and moths, 13 mites, 9 lice, 7 bees, 5 wasps, 5 cockroaches, 5 spiders, 4 ants and a number of other groups. In warmer climates, termites are serious pests in the urban habitat; 183 species are known to affect buildings and 83 species cause serious structural damage.

All content from Kiddle encyclopedia articles (including the article images and facts) can be freely used under Attribution-ShareAlike license, unless stated otherwise. Cite this article:
Habitat Facts for Kids. Kiddle Encyclopedia.