Save the Redwoods League facts for kids

Save the Redwoods League is a nonprofit organization whose mission is to protect and restore coast redwood (Sequoia sempervirens) and giant sequoia (Sequoiadendron giganteum) trees through the preemptive purchase of development rights to notable areas with such forests.

It relies on donations from private individuals as well as funding from foundations, corporations, government agencies, and investments to buy, restore, and provide public access to redwood forest lands. The League has protected more than 200,000 acres (810 km2) of forestland. As of 2018, the League has helped create 66 redwood parks and reserves, including Humboldt Redwoods State Park and Redwood National and State Parks.

In 1917, National Park Service Director Stephen Mather asked conservationists John C. Merriam, Madison Grant, and Henry Fairfield Osborn to travel to northern California to investigate the status of the old-growth coast redwoods that were reportedly being logged in vast numbers for building materials. All four of these men were members of the Boone and Crockett Club.

After witnessing the devastation of the forests on their trip, Merriam, Grant, and Osborn decided that protecting the ancient redwoods by purchasing groves and creating a public park was an urgent endeavor, and in 1918 they established Save the Redwoods League to achieve this goal. The first donors to the League were Stephen Mather, E.C. Bradley, William Kent, Henry Fairfield Osborn, and Madison Grant.

In 1919, Newton B. Drury became the first Executive Secretary for Save the Redwoods League. He provided leadership to the League for the next 58 years, also serving as a National Park Service and California State Parks leader.

Also in 1919, members of the California Federation of Women’s Clubs established the Women’s Save the Redwoods League in Humboldt County. This group had roots over a decade in the making. It was in 1908 that the Humboldt County Federation of Women’s Clubs sent a children's petition with over 2,000 signatures to the U.S. Forest Service requesting that President Theodore Roosevelt establish a national redwood park.

In the 1944, the League acquired 4,280 acres for Jedediah Smith Redwoods State Park. In 1945, the League and the Garden Club of America raised money to create the 5,000-acre National Tribute Grove in that same park honoring World War II service members. In 1948, dawn redwoods (Metasequoia glyptostroboides), thought to be extinct were discovered in China and the League funded scientist Ralph Chaney's trip to investigate.

From 1951-1959, the League's Newton Drury was the director of the California Division of Beaches and Parks, later known as the California State Parks system. In 1954 the League helped acquire the South Grove of giant sequoias to be added to Calaveras Big Trees State Park.

In 1960, the Avenue of the Giants Parkway was founded in Humboldt Redwoods State Park preceded by a 40-year land acquisition process by the League. In 1968, after years of lobbying Redwood National Park was established by Congress.

In 2018, the League celebrated its centennial year launching the “Stand for the Redwoods, Stand for the Future” campaign and publishing the Centennial Vision for Redwoods Conservation that includes the goal to "double the size of coast redwood forests in parks and reserves to 800,000 acres." The California State Senate declared 2018 the Year of the Redwoods with the passage of SR 100, authored by Senator Mike McGuire and many co-authors. The California State Assembly adopted House Resolution (HR 96), authored by Assemblymember Mark Stone, recognizing the League’s 100th birthday. And, on September 27, 2018, California Governor Jerry Brown declared October 2018 as “California Redwoods Month," recognizing redwoods as a "globally significant treasure" and encouraging people to "support organizations working to ensure a healthy future for our redwood forests."

An interactive timeline of the history of redwoods and Save the Redwoods League can be found on their website.

Arborist next to Del Norte Titan at the Grove of Titans

The League’s Vibrant Forests Plan attempts to provide a science-based conservation strategy for the remaining coast redwood and giant sequoia ecosystems. Conservation decisions made by the League are guided by the Vibrant Forests Plan's strategies, helping to set priorities for land acquisitions, stewardship, and restoration initiatives.

In 2018, the League published a State of the Redwoods Conservation Report for the first time. The report draws on scientific research to evaluate environmental threats facing coast redwoods and giant sequoia, how much progress has been made to date mitigating each threat, and whether that progress is continuing or in decline. Some key threats include the amount of unprotected forests, number of trees with old-growth characteristics, level of human encroachment, and fire preparedness status.

The League has an active scientific research program that seeks to expand the understanding of the coast redwood and giant sequoia forests and ecosystems of which they are a key component. Their Research Grants Program provides funding to leading scientists studying redwood forest ecosystems, threatened and endangered species, and climate change impacts. Some of the major League-led research projects are the Redwoods and Climate Change Initiative (RCCI), the Redwood Genome Project, and Citizen Science Programs.

LiDAR is a key scientific technology used by the League and its forest researchers to aid in measuring tree height, biomass, and leaf area. This information can be useful in reforestation efforts, and also in finding the tallest redwood trees. The League’s first use of LiDAR was made possible by a grant from Kenneth Fisher.

Since it was established, the League has protected over 200,000 acres of ancient redwoods. Land purchased by the League is generally donated to California State Parks, which the organization helped found, or to the National Park Service for permanent protection of the redwoods, as well as public enjoyment and education.

The League also provides gifts to establish and grow regional preserves and parks, many of which are open to the public. For example, the League established the Purisima Creek Redwoods Open Space Preserve which is part of the Midpeninsula Regional Open Space District (Midpen) in the San Francisco Bay Area.

With less than five percent of the ancient redwood forest remaining, the League is leading efforts to restore old-forest characteristics to young redwood forest stands. In a partnership with the National Park Service and California State Parks called Redwoods Rising, the League is working to restore tens of thousands of acres in Redwood National and State Parks, including 25,000 acres (100 km2) in the heavily-logged Mill Creek watershed in Jedediah Smith Redwoods State Park.

Approximately one-third of giant sequoia groves were partially or heavily logged. Restoration of these forests, helping them to achieve more old-growth characteristics, is an important component of their conservation.

The League provides numerous educational programs and resources to help K-12 students learn about redwoods forests in the classroom and on field trips. These programs give students the opportunity to learn STEM subjects from real-world examples, to be inspired to protect the forests, and to discover career opportunities in scientific research, park interpretation, and forest management. The League provides many educational resources and curriculum materials directly to teachers and partners with other organizations to extend their reach, such as by providing educational grants. 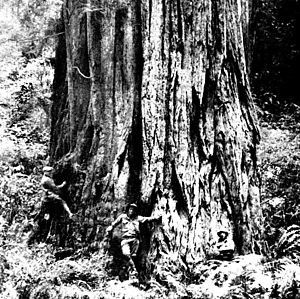 Frederick Russell Burnham, a founding member of the League, at his 5,000-acre (20 km²) La Cuesta cattle ranch, Three Rivers, California, near the entrance to Sequoia Park in 1908

In 1921, Boone and Crockett Club member Dr. John C. Phillips donated $32,000 to purchase land and create the Raynal Bolling Memorial Grove in the Humboldt Redwoods State Park. That same year, the Stephen T. Mather – William Kent Grove was also established in the same park. Since 1921, the League has established over 1000 redwood memorial groves, in more than thirty of California's redwood parks. One grove is named after Newton B. Drury, who served as executive director of the league as well as serving as the fourth director of the National Park Service. He served in the league's leadership during most of the period from 1919 to 1978. Another grove is named after Drury and his brother Aubrey.

The League continues to operate a Dedicated Grove or Tree Program to help raise funds to carry out its mission. In return for a donation, a grove or tree can be named as a memorial to or in honor of an individual, family, or organization.

In 1931, Major Frederick Russell Burnham commissioned a survey near Bull Flat Creek in Humboldt County, a spot where League founder Madison Grant believed the world's tallest tree might be found. When the tree, a 364-foot redwood, was indeed found, the California State Park Commission dedicated the tree to the founders of the Save the Redwoods League on September 13, 1931: "As a living monument symbolizing eternal life and duration of our gratitude." Burnham lead the main address in which he declared: "It is an ancient and racial urge that has brought us together today in the shade of this far Western forest like the druids of old." The Founders Tree immediately became and remains the most visited spot in the redwoods region and the focus of many ceremonies. The height measurement has since been revised to 346.1 feet.

All content from Kiddle encyclopedia articles (including the article images and facts) can be freely used under Attribution-ShareAlike license, unless stated otherwise. Cite this article:
Save the Redwoods League Facts for Kids. Kiddle Encyclopedia.