From 1887 to 1890 the Rockland Lime and Lumber Company harvested limestone from a scree slope and fed it into four iron and stone lime kilns they erected onsite. Long exposure to very hot fires extracted lime. Barrels of lime were slid on a cable out to Rockland Cove, where they were loaded onto ships. The lime was a key ingredient in the cement that was used for construction in San Francisco and Monterey. However, after three years the company had exhausted most of the limestone as well as the redwood used to fire the kilns. Today an easy .5-mile (0.80 km) trail leads to the lime smelting ruins, which include four kilns and some stone walls and bridge abutments.

The redwood forest recovered from this industrial use, but in 1984 a private landowner planned to log the west fork of Limekiln Creek. Conservationists objected and succeeded in getting the land preserved as a public park. The campground was family-owned before it was then sold and operated by the Esalen Institute for a number of years. The property was transferred to the California state park system and opened in September 1995.

Limekiln State Park was heavily damaged in the Chalk Fire of September and October 2008. In total the Chalk Fire burned 16,269 acres (65.84 km2) in California. Due to the damage the park was closed, not reopening until July 2, 2010. At that time the Limekiln Falls Trail remained closed, but reopened in summer 2011. The Hare Creek Trail is shorter due to damage related to the Chalk Fire. 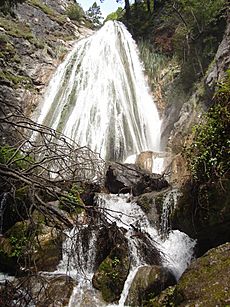 Limekiln State Park was one of many state parks threatened with closure in 2008. Those closures were ultimately avoided by cutting hours and maintenance system-wide. The park was again threatened with closure, along with 70 other California state parks in July 2012 as part of a deficit reduction program. A partner organization has signed an agreement to keep the park open.

Limekiln State Park has a small but popular campground with 31 sites among the redwoods and 11 sites with an ocean view. Easy trails lead to the lime kilns or up Hare Creek Canyon. Another leads to Limekiln Falls on the east fork of Limekiln Creek.

All content from Kiddle encyclopedia articles (including the article images and facts) can be freely used under Attribution-ShareAlike license, unless stated otherwise. Cite this article:
Limekiln State Park Facts for Kids. Kiddle Encyclopedia.