The Guadalupe Creek watershed begins on the northeast-facing slope of the peak of San Bruno Mountain as Devil's Arroyo, which descends quickly northwards to the head of the Guadalupe Valley. The confluence of Devil's Arroyo and Wax Myrtle Ravine is at the head of the Guadalupe Valley at elevation 200 feet, where the Guadalupe Creek mainstem flows eastward largely confined to underground pipes and ditches, emerging to daylight just east of Bayshore Boulevard. From there it flows for a few dozen yards to its mouth in Brisbane Lagoon. This lagoon is a remnant of San Francisco Bay, formed by the construction of the U. S. Highway 101 causeway, and became diminished when its north and central portions (which are now crossed by Visitacion Creek) were filled with garbage and landfill. Seasonal creeks which contribute to the Guadalupe Creek watershed include Owl Canyon and Buckeye Canyon. After passing into the lagoon, the waters of the Guadalupe Valley watershed pass through a culvert under the freeway into the Bay. 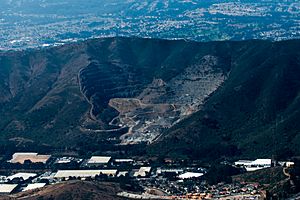 Guadalupe Creek is part of the Visitacion-Guadalupe Valley Watershed, which is a large bowl straddling San Francisco and San Mateo Counties. It drains the area bounded by Bayview Hill (by Candlestick Park), McLaren Ridge and San Bruno Mountain. The mountain’s highest peak reaches 1,314 feet, Bayview Hill’s summit is 500 feet, and the highest summit of McLaren Ridge is 515 feet.

The Guadalupe Quarry is carved into the northeastern-facing slope of San Bruno Mountain on the south side of the Guadalupe Valley. It's located in the city of Brisbane, California.

All content from Kiddle encyclopedia articles (including the article images and facts) can be freely used under Attribution-ShareAlike license, unless stated otherwise. Cite this article:
Guadalupe Valley Creek Facts for Kids. Kiddle Encyclopedia.