Two other museums are operated by the SMCHA including the Woodside Store and the Sánchez Adobe Park.

The San Mateo County Historical Association was founded in 1935. One of its early members was Dr. Frank Stanger, a history professor at San Mateo Junior College, now the College of San Mateo. Through his efforts, the San Mateo County Historical Museum (now the San Mateo County History Museum) was founded in a College classroom in 1941. As the College grew, so did the Museum. Then in 1998, seeking larger and more publicly accessible quarters, the Historical Association's Board of Directors decided to move the Museum into the old courthouse in downtown Redwood City. The Museum expanded from its 6,000 square-foot original location to 40,000 square feet. Between 1998 and 2006, more than $20 million was spent on the restoration and renovation of the exterior and interior of the museum. 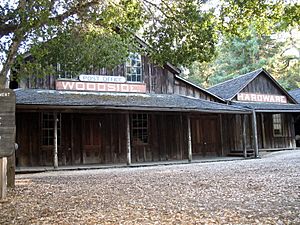 The Woodside Store was constructed in 1854 by pioneer dentist Robert Orville Tripp and Mathias Parkhurst. This redwood emporium sat in the middle of the San Francisco Peninsula's lumbering district; it was, for a time, the only general store between San Francisco and Santa Clara. It was preserved through the efforts of the Historical Association in the 1940s. After being taken under the wing of the Association in 1979, it was subject to a substantial restoration during the mid-1980s and completed by 1994. 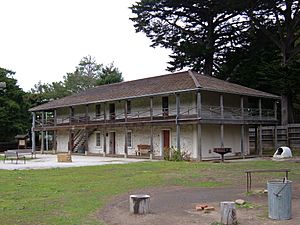 The Sánchez Adobe is the site of important regional history during the first three periods of California History. During Native California times the Aramai people established the village of Pruristac here. During the Spanish colonial period, it was an important agricultural outpost. During Mexican times, Francisco Sánchez, one-time Alcalde of Yerba Buena (later San Francisco), built his substantial adobe house at this site, which was completed in 1846. Lobbying efforts of the Historical Association inspired the County to obtain the five-acre site for a park in the 1940s. Since 1978, extensive archaeological investigations have been accomplished. Today, the County and the Historical Association are working on a master plan to improve the interpretive value of this unique location.

All content from Kiddle encyclopedia articles (including the article images and facts) can be freely used under Attribution-ShareAlike license, unless stated otherwise. Cite this article:
San Mateo County History Museum Facts for Kids. Kiddle Encyclopedia.