Kids Encyclopedia Facts
This page is about the city in California. For the unincorporated community in Michigan, see Breen Township, Michigan.

Foster City was founded in the 1960s on engineered landfill in the marshes of the San Francisco Bay, on the east edge of San Mateo. The city was named after T. Jack Foster, a real estate magnate who owned much of the land comprising the city and who was instrumental in its initial design. His successor firm, Foster Enterprises, run by his descendants, is still active in real estate affairs throughout the San Francisco Bay Area.

Forbes ranked Foster City #10 on their 2009 list of America's Top 25 Towns to Live Well. Money has also recognized Foster City multiple times as one of the Best Places to Live.

The annual average precipitation is 20.16 inches. The wettest month of the year is January with an average rainfall of 4.20 inches. 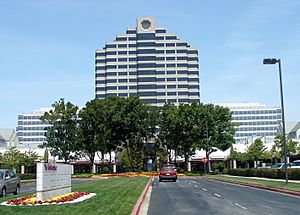 Around 1993 Visa Inc. began consolidating various scattered offices in San Mateo, California to a location in Foster City. Visa's headquarters were in Foster City, and Visa became Foster City's largest employer. Visa owns four buildings at the intersection of Metro Center Boulevard and Vintage Park Drive. As of 2009 it employed about 3,000 people at the complex. During that year Visa signed a 10-year lease agreement for the top three floors of 595 Market Street in San Francisco and moved its top executives there. Visa continued to keep employees at the Foster City offices. As of 2009, after the headquarters move, the Foster City facilities remained the company's center of employment, and the post-headquarters move Foster City buildings housed 2,400 employees as of 2009.

Other companies with headquarters in Foster City:

According to the City's 2015 Comprehensive Annual Financial Report, the top employers in the city are:

Foster City's Werder Pier is a remainder of the original expanse of the San Mateo-Hayward Bridge. It is also one of the state's longest and oldest piers in existence. Unfortunately, due to much needed repair, the once popular fishing pier is no longer in operation.

The movie Over the Edge is based upon events occurring in Foster City, chronicled in a 1973 article titled "Mousepacks: Kids on a Crime Spree" in the San Francisco Examiner.

The music video for "Super Hyphy", a song by Bay Area rapper Keak Da Sneak, was filmed at Bowditch Middle School. R&B singer Keyshia Cole was also featured in the music video which was produced by Half-White Productions.

Herb Perez, 1992 Olympic gold medalist in Tae Kwon Do, formerly served as chairman of the Foster City parks and recreation committee. Perez also appeared as himself (with the nickname "Olympus") on '90s martial-arts TV series WMAC Masters. He is now the mayor and a member of the city council.

All content from Kiddle encyclopedia articles (including the article images and facts) can be freely used under Attribution-ShareAlike license, unless stated otherwise. Cite this article:
Foster City, California Facts for Kids. Kiddle Encyclopedia.