The park is situated on 20 acres (8 ha) which overlook Foster City's lagoon. The park houses the William E. Walker Recreation Center, and includes a waterfront, outdoor amphitheatre, sailboat tie-up facilities, boardwalk, lawn areas, and a gazebo on the lake. There is a pathway that goes around the perimeter of the park, which also has ADA access. 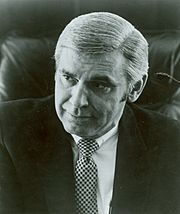 In 2003, on the 25th anniversary of his death, a special memorial tribute was held in Congressman Ryan's honor in Foster City, California. Ryan's family and friends including California State Senator Jackie Speier and Ryan's daughters were in attendance. The San Francisco Chronicle reported that "Over and over today, people described a great man who continually exceeded his constituents' expectations." Towards the end of the memorial service, parents of those who had died in Jonestown stood in honor of the congressman.

After the service had concluded, mounted police escorted the family and friends into Leo J. Ryan Memorial Park. A wreath was laid next to a commemorative rock that honored Ryan. 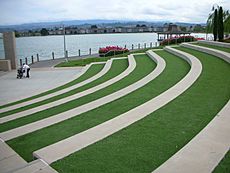 After a three-year construction project, the park was rededicated on November 13, 2005. Notable individuals in attendance included Congressman Ryan's two daughters, as well as Foster City council members and other members of government. Jackie Speier was also in attendance. Ryan's family stated: "Foster City's decision to name the park there after our dad really touched us ... They've done remarkable things with the park."

From March to October annually, Leo J. Ryan Memorial Park boasts food trucks each evening behind the Recreation Center. Additionally, in the summer, concerts are held in the park's amphitheater on Friday evenings.

For more year round activities, the park offers a plethora of water sports on the bordering lagoon, such as paddle boating and windsurfing.

All content from Kiddle encyclopedia articles (including the article images and facts) can be freely used under Attribution-ShareAlike license, unless stated otherwise. Cite this article:
Leo J. Ryan Memorial Park Facts for Kids. Kiddle Encyclopedia.