Carolands Chateau is a 46,050-square-foot (4,278 m2), 4.5 floor, 98 room mansion on 5.83 acres (2.36 ha) in Hillsborough, California. An example of American Renaissance and Beaux-Arts design, the building is a California Historical Landmark and is listed on the National Register of Historic Places.

Carolands is one of the last of the houses built during the Gilded Age, a period of great mansion-building that included famous houses of the Vanderbilt family, such as Marble House, Biltmore Estate and The Breakers, and stately California houses such as Filoli and the Huntington family's mansions.

The woman who built Carolands, Harriett Pullman Carolan (1869–1956), was the daughter of George Pullman, a 19th-century industrialist, one of Chicago's wealthiest men, and founder of the Pullman Company, famous for its Palace railway cars. In Chicago in 1892, Harriett Pullman married Francis Carolan of San Francisco and moved with him to California. In 1912, she acquired 554 acres (224 ha) of land in Hillsborough, on which she intended to build a house and garden that would excite "the wonder and admiration of America" and reflect her many refined and cultivated interests. The result was a masterpiece of Beaux-Arts architecture, inspired by the court architecture of Louis XIV. Carolan chose the site, the highest in the neighborhood, for its commanding views of the San Francisco Bay and the surrounding hills.

Harriett Carolan commissioned plans for the chateau from the Parisian architect Ernest Sanson, at the time France's foremost designer of prestigious private houses. Sanson was a classicist, and his design for the chateau's exterior was inspired by the 17th-century designs of François Mansart. He was seventy-six years old, near the end of a long and distinguished career, and never visited the California site. Carolan engaged the San Francisco-based Willis Polk, a distinguished architect in his own right, to be the structural designer and construction manager, instructing him to faithfully execute Sanson's designs.

France's leading landscape architect, Achille Duchêne, designed Carolands' gardens. Duchêne's work was inspired by the works of the great 17th-century landscape designer André Le Nôtre, whose most famous creations included the gardens at the Palace of Versailles, Vaux-le-Vicomte and the Jardins des Tuileries. In his original, ambitious design for Carolands, Duchêne planned miles of roadways leading across extensive grounds, landscaped with thousands of shrubs and trees, accented by fountains and statuary. Only a small portion of the scheme was ever built.

Soon after Harriett Carolan secured the land in 1912, Duchêne arrived in San Francisco to lay out the grand parterre gardens. In late 1913, Ernest Sanson began to design the house. His plans included a dry moat around two sides of the house, discreetly located to provide light and air, and access, to the service spaces in the basement, while not blocking views of the gardens from the principal rooms on the main floor. In his design, Sanson incorporated three 18th-century period rooms that Carolan had purchased in Paris with the advice of the famous antique dealer Boni de Castellane.

In 1914, Willis Polk began grading the great terraces planned by Duchêne, sending progress photographs to the architects and to the owners. Polk began to build the reinforced concrete superstructure he had designed, creating the infill walls with brick, finishing them with concrete stucco, sanded and scored to resemble natural limestone. 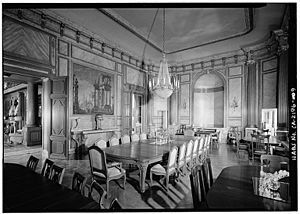 The Dining Room, photographed by Jack E. Boucher for HABS in August 1974

In mid-1916, the elaborate interior elements began arriving on the site. The house as completed had ninety-eight rooms, including nine bedrooms and baths for the owners and their guests, each with an antechamber to guarantee quiet and privacy. The service spaces were equally elaborate: a kitchen with walls and ceiling made of white glass tiles; a service elevator connecting all floors; and a butler's pantry and mezzanine with walls of Delftware tile. In the fall of 1916, Harriett and Frank Carolan moved in with their staff.

Harriett Carolan did not use her house for long: she separated from Frank Carolan in 1917 and closed the chateau the following year. After the separation, she moved to New York City, while Frank remained in California where he died in 1923. Two years later, Harriett married Col. Arthur Schermerhorn, and while the couple occasionally occupied Carolands, in 1928 Harriett removed her furniture and put the property up for sale.

The U.S. Government considered buying Carolands to use as a Western White House in 1939, and again during the Kennedy administration, but both times declined to purchase.

In 1945, Tomlinson Moseley bought the house and surrounding 550 acres (2.2 km²) from the Schermerhorns and began to sub-divide the land and build additional houses. In 1947, Life Magazine published an article about a charity event held at the house, the first opportunity for San Francisco-area residents to see its interior. According to the article, the house had been abandoned for twenty-five years, so that plumbing for the event had to be provided by a fire hose, and lighting required the use of portable generators and flood lights. 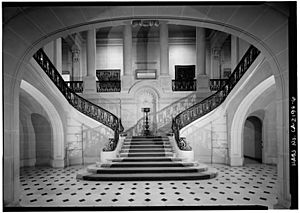 Grand Staircase (from first level), by Boucher for HABS in Aug 1974

In 1948, Moseley sold the property, by then reduced to 25 acres (10 ha), to Mrs. S. Coe Robinson. By 1950, she had carved off much of the remaining land into smaller parcels and begun to contemplate demolishing the house.

Countess Lillian Remillard Dandini purchased Carolands Chateau in 1950, saving it from demolition by speculators interested in developing the land, and uninterested in the house's architectural significance. Prior to her marriage in 1932 to Mexican-born Count Alessandro Dandini di Cesena, Lillian Remillard was an heir to the Remillard Brothers fortune, which derived from a brick manufacturing business dating back to California's gold rush, a business that benefitted greatly from the construction boom following the 1906 earthquake. During the twenty-three years (until her death) that she lived at Carolands, the countess entertained often and made the house available for numerous charity benefits. She frequently invited San Francisco's French community to the house and opened it annually to the San Francisco Bay area's French students. Her generosity in sharing the house inspired the Town of Burlingame to give her the town's "Woman of the Year" award.

In her later years the Countess Dandini lacked the necessary funds to maintain the house, and after she died in 1973 it was once again at risk of demolition. The countess willed the house and the remaining 5.83 acres (23,600 m2) to the Town of Hillsborough to be used as a French and Italian musical, artistic and literary center, but was unable to include an endowment. The Town of Hillsborough declined the gift, ruling the proposed use inconsistent with the town's charter while noting it could not afford to pay the cost to maintain the property.

In 1975, the house was added to the list of California Historical Landmarks (CHL #886), and to the National Register of Historic Places (NRHP #75000478). Nevertheless, Carolands suffered from frequent changes in ownership after Countess Dandini's death.

In 1976, Dr. Selwyn McCabe won the house in a probate auction, but declined to purchase, deferring to the next bidder, Rose 'Roz' Franks. In 1979, Franks lost the house to George I. Benny, who in turn lost it to foreclosure in 1982, after conviction for conspiring to defraud institutional lenders.

During these years, Carolands was often vacant.

Photograph by Boucher for HABS in Aug 1974 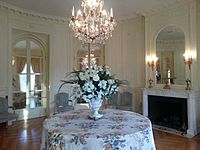 Photograph in 2013 after restoration
Bordeaux Salon

In 1986, Michael DeDomenico, an heir to the family controlling Rice-a-Roni and Ghirardelli, bought Carolands, and that year developers commissioned an Environmental Impact Report in support of a proposal to further subdivide the land and build additional houses. In 1989, the house suffered superficial damage in the Loma Prieta earthquake leading its owners to consider demolishing it. In 1997, a new owner proposed carving the house into fifteen condominiums, but the Hillsborough town charter banned multi-family residences.

In 1991, the Hillsborough Designer Showhouse was held at Carolands, attracting 68,000 visitors, each paying $20 admission, netting more than $1 million for the sponsoring charity and reviving interest in the house. Among the visitors were Dr. Ann Johnson, who would later buy Carolands, and her interior decorator, Mario Buatta, who would help her to restore it.

In 1998, Johnson and her husband, Charles Bartlett Johnson, bought the house and the remaining land for under $6 million. Dr. Johnson undertook extensive renovations: repairing the mechanical systems; removing asbestos; replacing the roof; and meticulously restoring the interior finishes, to bring the house back as much as possible to its original condition. Like the Countess Dandini, the Johnsons often shared the house for charity fundraisers and other worthy causes. Their primary purpose in purchasing and renovating Carolands was to preserve it for future decades.

In 2012, the Johnsons donated the house to Carolands Foundation, which conducts small group tours without charge, as described at their website.

The Heiress and Her Chateau: Carolands of California, a one-hour documentary about the chateau, first premiered January 19, 2014 on KQED-TV, and the following year was broadcast nationally on PBS. It was nominated for two Emmy Awards: Outstanding Achievement – Cultural/Historical Documentary and Outstanding Achievement - Writer. Both documentaries were made by Luna Productions.

All content from Kiddle encyclopedia articles (including the article images and facts) can be freely used under Attribution-ShareAlike license, unless stated otherwise. Cite this article:
Carolands Facts for Kids. Kiddle Encyclopedia.