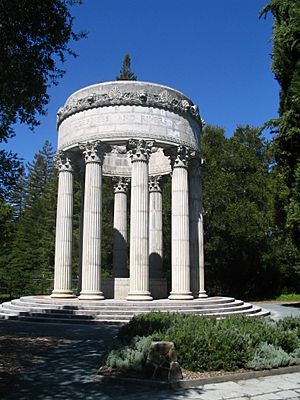 The Pulgas Water Temple is a stone structure west of I-280 at 56 Cañada Road, Redwood City, California, United States, designed by architect William G. Merchant. It was erected by the San Francisco Water Department to commemorate the 1934 completion of the Hetch Hetchy Aqueduct and is located at the aqueduct's terminus; originally water flowed through a vault under the temple itself, but new requirements for treatment require it to be diverted to a plant nearby.

The permanent water temple was completed in 1938, replacing an original made largely of plywood. Designed by architect William Merchant and with carving by Albert Bernasconi, it consists of a circle of fluted Corinthian columns surmounted by a large masonry ring bearing the inscription "I give waters in the wilderness and rivers in the desert, to give drink to my people" [from Isaiah 43:20]. There is a reflecting pool lined with cypress trees.

San Francisco and other Bay Area communities are supplied with water from the Hetch Hetchy Reservoir approximately 160 miles away via the Hetch Hetchy Aqueduct. Originally, the water flowed over a small C-shaped waterfall within the Pulgas Water Temple itself and then continued for approximately 800 feet down a canal to the west into Upper Crystal Springs Reservoir. 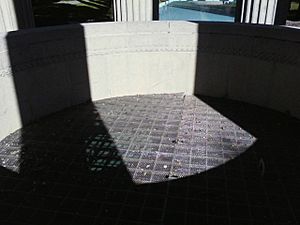 Grate was placed covering the well inside the temple

The well within the temple was covered with a grate to prevent thrill-seekers from jumping in and riding the water down the canal. Since 2004, water no longer flows through the temple, but instead is diverted to a nearby treatment plant where chloramine added at the Sunol treatment plant is removed before the water enters the reservoir, to avoid possible ecological damage from the additive. Water fed into the water supply is treated again with chloramine at a plant in San Bruno.

California Historical Landmark No. 92 is located here, commemorating the camping place, somewhere in this immediate area, of the Spanish Portola expedition on November 11, 1769. Members of the expedition were the first Europeans to explore inland areas of California, and the first to see San Francisco Bay. On the previous day, while camped at San Francisquito Creek, expedition leaders made the decision to turn around and begin the return journey to San Diego. This meant first retracing their steps north to where they had crossed Sweeney Ridge from the coast.

Pulgas is the Spanish (and Portuguese) word for "fleas", which were encountered by early Spanish explorers of the area. In this location, the name comes from the former Rancho de las Pulgas, an early Spanish land grant. 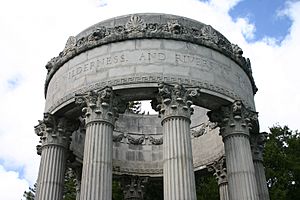 All content from Kiddle encyclopedia articles (including the article images and facts) can be freely used under Attribution-ShareAlike license, unless stated otherwise. Cite this article:
Pulgas Water Temple Facts for Kids. Kiddle Encyclopedia.