Kids Encyclopedia Facts
Not to be confused with Portola, California.

Portola Valley was named for Spanish explorer Gaspar de Portolá, who led the first party of Europeans to explore the San Francisco Peninsula in 1769. The town was officially incorporated in 1964. The town's long history dates back to 1834, when land was used for the Rancho Corte de Madera primarily for cattle grazing. Another place of interest within the town was the Searsville area (now owned by Stanford). Searsville's redwood trees were logged and used for building housing. Evidence of logging can be seen by walking through the preserve and examining the abnormal redwood growth from where the trees used to stand. Today, Portola Valley maintains its small-town charm and rural feel with a population of under 5,000 people, as well as boasting to have more miles of trails than roads to preserve its natural beauty.

Portola Valley has also been included many times on lists of America's wealthiest ZIP codes. Initially, Portola Valley was an exclusive vacation community for wealthy San Franciscans who would make trips down during the summer in horse and buggy. It kept growing and eventually became central to the tech industry and Silicon Valley as an alternative to the hustle and bustle of more crowded cities, providing a quiet rural refuge directly in the heart of the Peninsula for over 4,000 residents.

Portola Valley is Featured in: 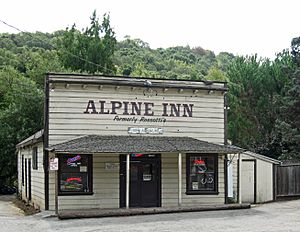 There were 1,772 households, out of which 532 had children under the age of 18 living with them, 1,176 were married couples living together, 68 had a woman householder with no man present, and 431 were non-families. 339 of all households were made up of individuals, and 226 had someone living alone who was 65 years of age or older. The average household size was 2.75 and the average family size was 2.93. 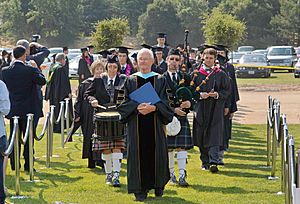 The Portola Valley Elementary School District has two public primary schools: Ormondale School (with grades K–3) and Corte Madera School (grades 4–8). The public high school is Woodside High School part of the Sequoia Union High School District and in the neighboring community of Woodside. Ormondale is named for the Ormondale ranch that had covered much of present-day Westridge, Oak Hills, and Ladera and was home to the famous English racehorse, Ormonde, in his later years.

The city is served by the Portola Valley Public Library of the San Mateo County Libraries, a member of the Peninsula Library System.

All content from Kiddle encyclopedia articles (including the article images and facts) can be freely used under Attribution-ShareAlike license, unless stated otherwise. Cite this article:
Portola Valley, California Facts for Kids. Kiddle Encyclopedia.