Vinod Khosla (born 28 January 1955) is an Indian-American billionaire businessman and venture capitalist. He is a co-founder of Sun Microsystems and the founder of Khosla Ventures. In 2014, Forbes counted him among the 400 richest people in the United States. In 2020, he was listed No. 353 on the Forbes 400 list.

Since 2010, he has been engaged in a legal dispute related to his attempt to close off public access to Martin's Beach.

Khosla's father was an officer in the Indian Army and was posted at New Delhi, India. He attended Mount St Mary's School. Khosla read about the founding of Intel in Electronic Engineering Times as a teenager, and this inspired him to pursue technology as a career. He did a BTech in electrical engineering from IIT Delhi, a master's in biomedical engineering from Carnegie Mellon University, and MBA from Stanford Graduate School of Business.

In 1982, Khosla co-founded Sun Microsystems (SUN is the acronym for the Stanford University Network), along with Stanford classmates Scott McNealy, Andy Bechtolsheim, and UC Berkeley computer science graduate student Bill Joy. Khosla served as the first chairman and CEO from 1982 to 1984, when he left the company to become a venture capitalist.

He also invested in an Indian microfinance company, SKS Microfinance, which lends small loans to poor women in rural India. Khosla is also one of the founders of TiE, The Indus Entrepreneurs, and has guest-edited a special issue of The Economic Times, a business newspaper in India.

In 2004, he founded Khosla Ventures. Khosla was featured on Dateline NBC in May 2006, where he discussed the practicality of ethanol as a gasoline substitute. He is known to have invested heavily in ethanol companies in hopes of widespread adoption.

Khosla was a major proponent of the "Yes on 87" campaign to pass California's Proposition 87, The Clean Energy Initiative, which failed to pass in November 2006.

In 2006, Khosla's wife Neeru co-founded the CK-12 Foundation, which aims to develop open-source textbooks and lower the cost of education in America and the rest of the world. Khosla and his wife are also donors to the Wikimedia Foundation, in the amount of $600,000. 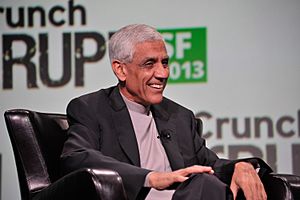 Khosla formed his own venture capital firm, Khosla Ventures, in 2004. The firm is based in Menlo Park, California, and manages approximately $1 billion of investor capital as well as investments funded by Khosla himself.

In May 2010, it was announced that former British Prime Minister Tony Blair was to join Khosla Ventures to provide strategic advice regarding investments in technologies focused on the environment. Khosla Ventures also invested in HackerRank.

Other accomplishments and affiliations

Khosla has founded a number of other businesses and organizations, and was involved with the founding of Daisy Systems in 1981.

Khosla served as the honorary chair of the DonorsChoose San Francisco Bay Area advisory board. In 2000, Khosla was a recipient of the Golden Plate Award of the American Academy of Achievement. In 2007, Khosla was an award recipient in the Northern California region for the EY Entrepreneur of the Year award. Khosla is a member of the board of trustees of the Blum Center for Developing Economies at the University of California, Berkeley. The center is focused on finding solutions to address the crisis of extreme poverty and disease in the developing world. He is an advisor for HackerRank, a website for competitive coding. Khosla is a member of the Xconomists, an ad hoc team of editorial advisors for the tech news and media company, Xconomy.

In April 2021, Khosla made an offer to fund oxygen imports for hospitals in India amid the ongoing COVID-19 pandemic. 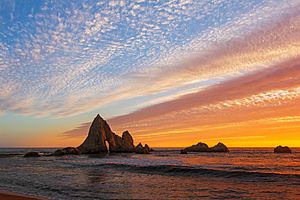 Since 2010, Khosla has been engaged in a legal dispute surrounding public access to Martin's Beach, several miles south of Half Moon Bay, California, where he owns adjacent land. His attempts to close the beach by erecting a gate with armed guards at the road entrance and painting over the welcome sign that existed prior to his ownership of the property has been the subject of legal challenges, popular resentment, and extensive press coverage. Khosla won an early judgment in the California courts that determined he has a right to control the beach via the Mexican land rights guaranteed by the Treaty of Guadalupe Hidalgo. However, his ability to restrict access was also challenged in a suit brought by the Surfrider Foundation. Khosla ultimately lost that suit, and San Mateo Superior Court ordered that he could not restrict public access to the beach without first obtaining a permit from the California Coastal Commission. In October 2014, Governor Jerry Brown signed legislation to re-open the beach to the public.

Martin's Beach was previously a popular family beach and surf spot before Khosla purchased the property adjacent to the beach and blocked access. The previous owners of the land had allowed the public to park vehicles at the beach for a fee, but the beach remained free to walk down to. Khosla won a victory in May 2014, when Judge Gerald Buchwald issued a ruling which concluded that Martin's Beach LLC 1 and 2, the formal owners of Martin's Beach, can block public access to the beach due to an exemption granted by the treaty, which ended the Mexican-American war. The judge concluded that Khosla's property is not subject to aspects of the California Constitution because it was originally a rancho that predated the State. The Surfrider Foundation filed a second lawsuit against Khosla for violations of the California Coastal Act. Khosla lost the second suit and Judge Barbara Mallach issued her final order for Khosla to open the gate. Former Congressman Pete McCloskey said about the land closure, "To put a rope across the road and say, 'The hell with you' — I'd call it the arrogance of great wealth."

Khosla told the state that he would sell a small slice of his property to enable members of the public to gain access to the beach again. The offer was for $30 million, almost as much as Khosla spent on the property ($32 million) but less than the annual budget of the Coastal Commission ($33 million).

In August 2017, a Californian court of appeal ruled that Khosla must restore public access to Martins Beach. The decision was widely seen as a major blow to Khosla and other billionaires who have sought to restrict access to previously public beaches in California. The plaintiffs, Surfrider Foundation, stated that they expected Khosla to take the case all the way to the US Supreme Court. In 2018 Khosla filed an appeal with the Supreme Court. The New York Times noted: "If (Khosla) wins, he could reshape the laws that govern 1,100 miles of (California) shore. And if he loses, all he would be forced to do is apply for a permit to change the hours of operation on a single gate." In October 2018, the Supreme Court announced that they would not hear the appeal of the California appeals court decision.

He is married to Neeru Khosla, his childhood girlfriend. They have four children.

All content from Kiddle encyclopedia articles (including the article images and facts) can be freely used under Attribution-ShareAlike license, unless stated otherwise. Cite this article:
Vinod Khosla Facts for Kids. Kiddle Encyclopedia.