East Palo Alto (abbreviated E.P.A.) is a city in San Mateo County, California, United States. As of the 2010 census, the population of East Palo Alto was 28,155. It is situated on the San Francisco Peninsula, roughly halfway between the cities of San Francisco and San Jose. To the north and east is the San Francisco Bay, to the west is the city of Menlo Park, and to the south the city of Palo Alto. Despite being called "East" Palo Alto, this is a misnomer, as the city is precisely due north of Palo Alto. While often incorrectly assumed to be part of the city of Palo Alto, East Palo Alto has always been a separate entity since its founding as an unincorporated community. It is also in San Mateo County, while Palo Alto is in Santa Clara County. The two cities are separated only by San Francisquito Creek and, largely, the Bayshore Freeway (the vast majority of East Palo Alto is northeast of the freeway, while all of the residential part of Palo Alto is southwest of the freeway). The revitalization projects in 2000, and high income high-tech professionals moving into new developments, including employees from Google and Facebook, have begun to eliminate the cultural and economic differences between the two cities. East Palo Alto and Palo Alto share both telephone area codes and postal ZIP codes.

About half of East Palo Alto's residents were African Americans in 1990, which was the result of redlining practices and racial deed restrictions in Palo Alto. Latinos now constitute about 65% of the total population, while the proportion of African Americans has decreased to about 15% . A small minority of Pacific Islanders also reside in East Palo Alto, most of Tongan, Samoan and Indo-Fijian origin.

The prosperity that benefited the Silicon Valley during the dot-com boom of the late 1990s largely bypassed East Palo Alto. The Ravenswood City School District, which serves East Palo Alto and part of adjoining Menlo Park, has struggled with low academic performance. Eventually, however, the Peninsula's shortage of land and soaring property prices meant that even East Palo Alto became an option for urban regeneration. Until recently, gentrification has been rare in East Palo Alto.

East Palo Alto also includes a small piece of land across the Bayshore Freeway (US 101) from the shopping center, a roughly triangular area between US 101 and San Francisquito Creek, which includes a former two-block-long retail business district known as Whiskey Gulch. The name dates back to the time that Stanford University, in Palo Alto to the west, was dry and prohibited alcohol sales within a radius of one mile (1.6 km) from the campus; Whiskey Gulch was just outside the limits, and was home to a number of liquor stores and bars. The city has torn down Whiskey Gulch and replaced it with the University Circle office complex. A 200-room Four Seasons hotel opened in University Circle in 2006. 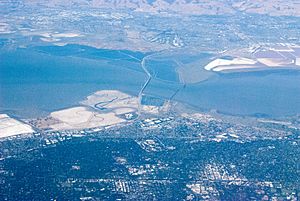 The Ohlone tribe of Native Americans inhabited this area at least by 1500 to 1000 BCE. One tumulus was discovered in 1951 during development of the University Village subdivision near today's Costaño School. After a year-long excavation of 60 graves and 3,000 artifacts, researchers concluded Native Americans had utilized the area as a cemetery and camp, rather than as a permanent settlement. In later years another mound was found near Willow Road and the railroad right-of-way.

From the 1850s through the 1940s, East Palo Alto went through many changes. In 1849, Isaiah Woods attempted to make East Palo Alto a major shipping town and named the city Ravenswood. In 1868, after Woods' investments failed he sold the wharf to Lester Cooley, who built a brick factory. When the brick factory closed down, it reverted to a farming community.

With the outbreak of World War I, the north side of East Palo Alto became a military training ground, of which only the Veteran's Administration Hospital in Menlo Park still exists. In the 1940s, East Palo Alto was a farming community with many Japanese residents. During the war, the Japanese were forced out, many to relocation centers, and did not return after the war. In the 1950s the farms were built over with cheap housing and many African-American families moved in. During the civil rights movement of the 1960s there was a renewed interest in African history, one expression of which was a fad for Swahili. The city was almost renamed Nairobi, center of the Swahili-speaking area in 1968 to reflect the population's African roots. Critics of the change pointed out that Nairobi was the capital of Kenya, in East Africa, and had little to do with the cultural roots of most black Americans. In the end, the change was not made.

Significant development, called 'gentrification' by critics, occurred in East Palo Alto from around 2000, with the construction of a large shopping center named Ravenswood 101—including a Home Depot, a Best Buy, and an IKEA store—and several upscale housing communities intended for high-earning Silicon Valley workers. This development faced opposition from some residents, who charged that it priced locals out of one of the region's only affordable communities while providing only low-paying retail jobs and consuming disproportionate land area (2.2 square miles). Supporters pointed to an increased tax base.

In 2008, after twenty years without a supermarket, East Palo Alto individuals and organizations established the East Palo Alto Community Farmers' Market. In November 2009, the Mi Pueblo Food Center grocery store opened in the Ravenswood 101 shopping center in the location of the former Circuit City store. Mi Pueblo was the city's first full-service supermarket in 23 years. Mi Pueblo operates more than a dozen markets in California, including one located in Mountain View. Although there are several other smaller local grocery stores in East Palo Alto, the establishment of Mi Pueblo Food Center in East Palo Alto marked a milestone in history for the city, as residents no longer had to drive to other cities to buy their groceries from a full-service supermarket.

Starting in 2006, a large real estate investor, Page Mill Properties, purchased almost the entire west side of East Palo Alto and contested most of the city's rent control laws in what some claimed was a 'predatory equity scheme'. Page Mill left East Palo Alto in the fall of 2009 after defaulting on a $240-million bank loan.

East Palo Alto has always had a rich history. While there is plentiful shopping and business outside East Palo Alto, there was relatively little in the city. Most of EPA was unincorporated county land, so it was not eligible for many of the revenue benefits of city status. Until 1983, East Palo Alto existed as an unincorporated "island" in San Mateo County, dependent on county government for services and on the San Mateo County Sheriff for police protection. After several years of pro-incorporation campaigning by local community groups, a 1982 ballot measure that was stopped by a lawsuit, and a subsequent election the next year, East Palo Alto became a city in June 1983, with Barbara A. Mouton as its first Mayor. (Because of subsequent legal challenges to the last ballot measure, it wasn't until 1987 that the city was officially recognized as such.) The legal challenges were led by former U.S. Congress member Pete McCloskey, who represented one of the real-estate brokers whose original blockbusting campaign had turned EPA into a mostly-black town. 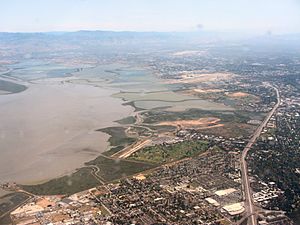 It is bordered on the west by Menlo Park, to the south by Palo Alto, and to the east by the San Francisco Bay. The San Francisquito Creek defines its southern edge. To the north are Ravenswood Point and the western end of the Dumbarton Bridge in Menlo Park.

There were 7,104 households of which 41.7% had children under the age of 18 living with them, 44.4% were married couples living together, 19.5% had a female householder with no husband present, and 28.5% were non-families. 22.2% of all households were made up of individuals and 5.1% had someone living alone who was 65 years of age or older. The average household size was 6.24 and the average family size was 7.65.

U.S. Route 101 cuts through the southern part of the city, with two on ramps and off ramps in the city (University and Willow). There are frontage roads on either side of the freeway. The Dumbarton Bridge in neighboring Menlo Park connects East Palo Alto to Alameda County, which lies to the east across San Francisco Bay, and carries State Route 84 into East Palo Alto toward U.S. 101.

Public transportation is provided by SamTrans.

All content from Kiddle encyclopedia articles (including the article images and facts) can be freely used under Attribution-ShareAlike license, unless stated otherwise. Cite this article:
East Palo Alto, California Facts for Kids. Kiddle Encyclopedia.