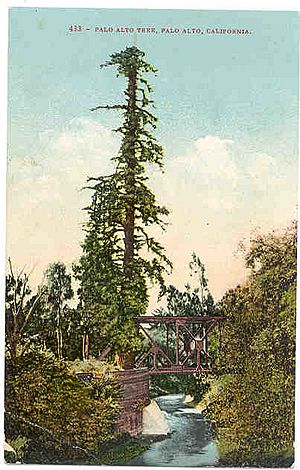 El Palo Alto, circa 1910. At the time the tree was in relatively poor health due to the soot from coal powered trains, as evident by its relatively thin canopy.

El Palo Alto (Spanish for the tall stick) is a coastal redwood (Sequoia sempervirens) located in El Palo Alto Park on the banks of San Francisquito Creek in Palo Alto, California, United States. It is famous for its historical significance and as the namesake of the city of Palo Alto.

As of July 2016, El Palo Alto is currently 110 feet (33.5 meters) in height, down from 162.2 feet (49.4 meters) in 1814. Its top progressively died from 1865 to 1955 from lowering of the water table so that its roots could no longer reach sustenance. The landmark redwood is 90 inches (2.3 meters) in diameter, and has a crown spread of 40 feet (12 meters). In 1955, an increment boring of the tree was taken and the tree's age was accurately determined to be 1,015 years. El Palo Alto originally had 3 trunks. It is unknown what happened to the first trunk; it remains as a stump attached to the current trunk. The second trunk fell in 1886, also for unknown reasons.

The tree is California Historical Landmark No. 2 (No. 1 is the Old Customhouse in Monterey). It is recognized by the National Arborist Association and International Society of Arboriculture for its historical significance as "a campsite for the Portola Expedition Party of 1769"; being frequented by the Costanoan/Ohlone Indians; and for its use as a sighting tree by surveyors plotting out El Camino Real. The tree is depicted on the city of Palo Alto's official seal and on the seal of Stanford University. It is the origin of the city's name.

A plaque at the base of the tree bears the following inscription:

Under this giant redwood, the Palo Alto, November 6–11, 1769, camped Portola and his band on the expedition that discovered San Francisco Bay, this was the assembling point for their reconnoitering parties. Here in 1774 Padre Palou erected a cross to mark the site of a proposed mission. The celebrated Pedro Font topographical map of 1776 contained the drawing of the original double trunked tree making the Palo Alto the first official living California landmark.

It was two years after Padre Palou's visit that Padre Font, on the De Anza Expedition's way back to Mexico after founding San Francisco, measured the giant redwood "five and a half yards around" in his diary on March 30, 1776. Also at El Palo Alto, de Anza and Font found the wooden cross that Palou had placed two years earlier, but de Anza decided to move the mission location to Santa Clara because San Francisquito Creek's water was too low in the dry season.

Health of the tree and conservation 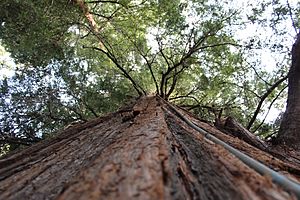 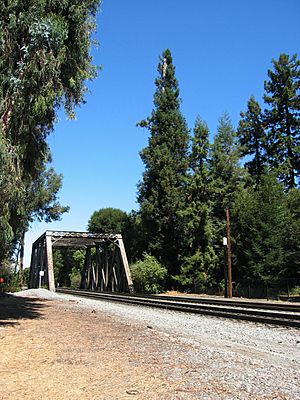 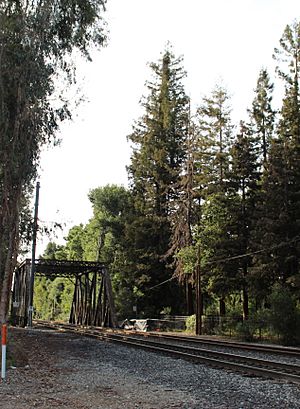 Causes of the tree's decline have been attributed to coal-burning locomotive soot and lowering of the water table by nearby orchard wells, including the 1912 Tower Well two blocks away. By the 1960s, the water table was so low that salt water was intruding into nearby wells. El Palo Alto was unable to access this lowered groundwater, as redwoods are typically shallow rooted.

By the mid-1960s the tree was in severe decline, leading to successive die-off of the treetop, until the water table began to recover in the late 1990s. Efforts to restore the tree's health by the Southern Pacific Railroad, the City of Palo Alto and local citizens included progressive pruning of the dying treetop, addition of soil and mulch at the tree’s base, removal of dead limbs, pesticide spraying and installation of a pipe up its trunk to bring water to mist the top of the tree. Although the tree stands today at only 68% of its former stature, it enjoys greater health than nearly a century ago.

A 1999 horticultural appraisal of El Palo Alto, conducted in accordance with the Guide for Plant Appraisal authored by the Council of Tree and Landscape Appraisers and published by the International Society of Arboriculture, valued the tree at $55,600.00.

In 2004, seedlings from El Palo Alto were planted in the American Forests Historic Tree Nursery in Jacksonville, Florida.

The tree was spray-painted with graffiti in August 2010, but was subsequently cleaned.

All content from Kiddle encyclopedia articles (including the article images and facts) can be freely used under Attribution-ShareAlike license, unless stated otherwise. Cite this article:
El Palo Alto Facts for Kids. Kiddle Encyclopedia.