Ralston Hall Mansion located in Belmont, California, was the country house of William Chapman Ralston, a San Francisco businessman, founder of the Bank of California, and financier of the Comstock Lode. It is an opulent Italianate Villa, modified with touches of Steamboat Gothic and Victorian details. It is a California Historical Landmark and is designated a National Historic Landmark. It is now part of Notre Dame de Namur University.

Ralston Hall Mansion is situated on the campus of Notre Dame de Namur University, on the San Francisco Peninsula. The mansion has been built around the villa of Count Leonetto Cipriani, former owner of the estate. Taking three years to build, it was completed in 1867, when San Francisco's leaders and first citizens had large summer homes on the Peninsula, an integral part of San Francisco high society. Architect John Painter Gaynor, who later worked with Ralston on the Palace Hotel in San Francisco, is thought to have worked on it. Several of the design elements of Ralston Hall Mansion were copied in the design of the Palace.

A history of San Francisco speaks of the palatial grandeur of Ralston Hall: "In a domed wing was the oval ballroom. Its walls were mirrored, and from the frescoed ceiling hung a great crystal chandelier whose reflected lights and sparkle filled the room. I have never seen a more effective setting for a ball."

The Hall is a four-floor, 55,000-square-foot (5,100 m2) mansion, with a stately dining room, a mirrored ballroom in the Versailles tradition, an opera box modelled after the Opéra Garnier in Paris, a grand staircase, 23 crystal chandeliers, and inlaid wood floors. Ralston greatly admired the Palace of Versailles, and incorporated several of the palace's elements in his design of the mansion. The mansion has a number of elegant sitting rooms and parlours. The Oriental Music Room has a set of Chinese high-tea chairs and buffets. Ralston Hall houses a collection of antiques accumulated by Ralston, including some valuable Thomas Hill paintings.

The grounds of the mansion contain numerous gardens, a stoney grotto, and a garden of 150-year-old bamboo trees.

Uses of the mansion

After Ralston's death, the estate passed to his former business partner, United States Senator from Nevada William Sharon, whose family lived in the house. Sharon's daughter Flora's wedding to Englishman Sir Thomas George Fermor-Hesketh, 7th Baronet, of Rufford was one of the last elaborate social events of the time, taking place in the mansion's ballroom. After Senator Sharon's death in 1885, the mansion became Radcliffe Hall, a girls' finishing school. From 1900 to 1922, it was the Gardner Sanitarium.

Since 1922, Ralston Hall has been on the campus Notre Dame de Namur University, formerly the College of Notre Dame. It contains the admissions office and is rented out for society weddings and other occasions.

A few of the notable persons who have been entertained at Ralston Hall include: 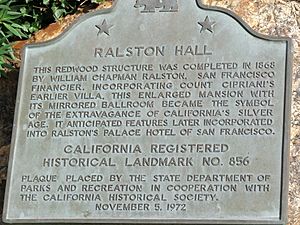 All content from Kiddle encyclopedia articles (including the article images and facts) can be freely used under Attribution-ShareAlike license, unless stated otherwise. Cite this article:
Ralston Hall Facts for Kids. Kiddle Encyclopedia.