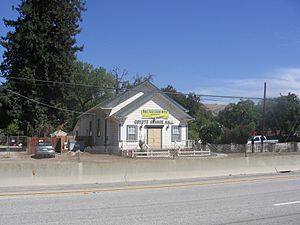 Coyote, originally Burnett, is an unincorporated community in a narrowing of Santa Clara Valley astride Coyote Creek, between San Jose and Morgan Hill, in Santa Clara County, California. Part of Coyote is inside the city limits of San Jose. Its ZIP Code is 95013; there is a small U.S. Post Office. It is inside telephone area codes 408 and 669.

Once the site of the Twelve Mile House a stagecoach station on the Butterfield Overland Mail, Coyote is notable for its historic Grange Hall, close to the Post Office and the Metcalf Energy Center. The town's name was changed from Burnett to Coyote because residents saw many coyotes in the area. The town nearly disappeared after U.S. Route 101 was rerouted as a freeway about one kilometer (0.6 mile) east of the town. The community was nearly absorbed by San Jose's urban sprawl, until collapse of the dot-com bubble canceled the city's plans. San Jose, however, still owns much of the land in the area after purchasing it prior to 2001.

Due to the moderating influence of the Pacific Ocean, Coyote enjoys a mild, Mediterranean climate. Temperatures range from an average midsummer maximum of 32.3°C (90.2°F) to an average midwinter low of 0.9°C (33.6°F). Average annual precipitation is 480 mm (18.9 in), and the summer months are typically dry. Snowfall is rare, about once every 20 years, and is light and short-lived when it occurs. Summer months are characterized by coastal fog which arrives from the ocean around 10 p.m. and dissipates the next morning by 10 a.m. Winter months have many sunny and partly cloudy days, with frequent breaks between rainstorms. The local terrain is inconducive to tornadoes, severe windstorms and thunderstorms. The local climate supports chaparral and grassland biomes, with stands of live oak at higher elevations.

All content from Kiddle encyclopedia articles (including the article images and facts) can be freely used under Attribution-ShareAlike license, unless stated otherwise. Cite this article:
Coyote, California Facts for Kids. Kiddle Encyclopedia.