Kids Encyclopedia Facts
This page is about the trail in San Jose and Santa Clara County, California. For the bicycle path in Los Angeles, see Coyote Creek bicycle path. For the backcountry trail in Wyoming and Montana, see Trails of Yellowstone National Park. 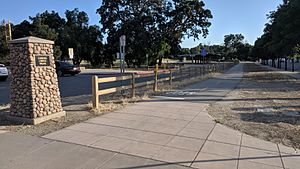 The northern portion of the trail is in the San Jose city limits. The northernmost point is at the southern tip of San Francisco Bay. The trail is not yet continuous within San Jose. A paved section exists between the Highway 237 Bikeway and Tasman Drive. A short disconnected segment is at Berryessa Road at the San Jose Flea Market and Berryessa BART Station. The trail is paved from Tully Road south for 2 miles to the end of the city-maintained segment at Hellyer County Park, where the paved county section continues.

Ecological artist Deborah Kennedy was commissioned by the San Jose Public Art Program to work alongside sculptor Diana Pumpelly Bates in 2004 on completion of a community project for the Coyote Creek Trail. Their public artworks, including Kennedy's 'Ripple Effect' and Bates 'Run River Run', are used to promote public awareness of a concrete landing pad and ramp leading to a levee where strollers, wheelchairs, and bicyclists have greater accessibility to the site. 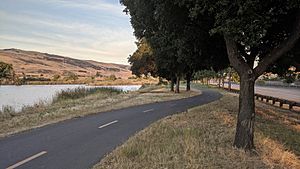 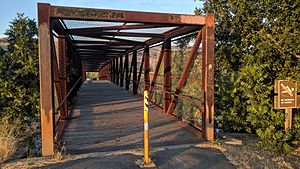 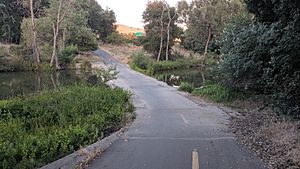 The southern county-maintained portion of the Coyote Creek Trail is part of the Coyote Creek Parkway, which includes the trail and a chain of county parks along the creek. The county portion is 15 miles of paved trail from Hellyer Park to Anderson Lake.

Landmarks on the trail

All content from Kiddle encyclopedia articles (including the article images and facts) can be freely used under Attribution-ShareAlike license, unless stated otherwise. Cite this article:
Coyote Creek Trail Facts for Kids. Kiddle Encyclopedia.