Anderson Dam with the spillway visible to the right.

Anderson Lake, also known as Anderson Reservoir, is an artificial lake in Santa Clara County, California, United States, near Morgan Hill. The reservoir is formed by the damming of Coyote Creek just below its confluence with Las Animas Creek. A 4,275-acre (1,730 ha) county park surrounds the reservoir and provides limited fishing ("catch and release"), picnicking, and hiking activities. Although swimming is prohibited, boating, water-skiing and jet-skiing are permitted in the reservoir.

The California Office of Environmental Health Hazard Assessment has issued a safety advisory for any fish caught in Anderson Lake due to elevated levels of mercury and PCBs.

The reservoir was created in 1950 by the construction of the Anderson Dam across Coyote Creek in foothills of the Diablo Mountains east of Morgan Hill. The reservoir and dam were named after Leroy Anderson, a key founder and first president of the Santa Clara Valley Water District. It is the largest reservoir owned by the district.

In January 2009, a preliminary routine seismic study suggested a small chance that a large-magnitude earthquake (6.6 with the dam at the epicenter, or 7.2 up to a mile away) could result in flooding in Morgan Hill and as far away as San Jose. In response, the Santa Clara Valley Water District (SCVWD) lowered the water level to 74 percent of capacity and announced further analysis of the situation, which could possibly result in retrofitting the dam if necessary. Updated findings in October, 2010 indicated that the dam could fail if a magnitude 7.25 earthquake occurred within 2 kilometres (1.2 mi) of the dam, potentially releasing a wall of water 35 feet (11 m) high into downtown Morgan Hill in 14 minutes, and 8 feet (2.4 m) deep into San Jose within three hours. In response SCVWD has lowered the water to 54% full, which is 60 feet (18 m) feet below the dam crest.

In July 2011, SCVWD issued a report stating that the seismic stability study on Anderson Dam was completed. The storage restriction that has been in place since October 2010 was adjusted, allowing 12 additional feet of storage, which measures 68 percent of the dam's capacity, up from 57 percent. The water district initiated a capital project for a seismic retrofit by the end of 2018. The operating restriction was to remain in place until the project complete. Remediation of the problem will cost as much as US$100 million.

In December 2016, SCVWD reported that further geotechnical analysis indicated considerably more work would need to be performed on the dam, effectively removing the dam completely and rebuilding it. The existing dam had been built on alluvial deposits, which could liquefy during an earthquake. Accordingly, the estimated cost rose to US$400 million and the start of work was rescheduled to 2020, with completion planned for 2023–2024.

After years of additional studies and interim actions, the Federal Energy Regulatory Commission dismissed the Water District's plans as insufficient to address the risk of catastrophic failure, and ordered on February 20, 2020 that lowering of the reservoir to deadpool storage begin no later than October 1. The letter noted that the district's "actions to date do not demonstrate an appropriate sense of urgency" regarding the risk of catastrophic failure in the case of earthquake. 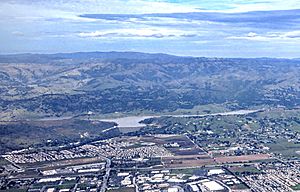 On February 21, 2017 during the 2017 California floods, the reservoir reached as high as 104% of capacity, creating a large flow over the spillway into Coyote Creek, which overflowed and flooded the Rock Springs/Summerside, Olinder, Naglee Park, Roosevelt, Wooster-Tripp and Berryessa neighborhoods of San Jose along US Highway 101 between the reservoir and the south San Francisco Bay.

All content from Kiddle encyclopedia articles (including the article images and facts) can be freely used under Attribution-ShareAlike license, unless stated otherwise. Cite this article:
Anderson Lake (California) Facts for Kids. Kiddle Encyclopedia.