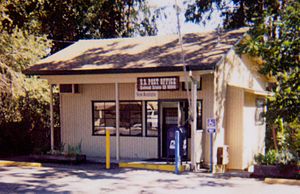 The Redwood Estates Post Office is a gathering place

Redwood Estates is a rural unincorporated community along State Route 17 in the coastal Santa Cruz Mountains in Los Gatos, California, United States. The Census Bureau includes it in a census-designated place named Lexington Hills. It lies inside the confines of Santa Clara County. The area is about eight miles from downtown Los Gatos and nine miles from the Santa Cruz County community of Scotts Valley.

Nearby Summit Road is roughly the dividing line between the counties: Santa Cruz County areas being generally west of Summit Rd. The Butano Fault (also known as the Butano Rift Zone), roughly follows Summit Road through the area. The ZIP code for post office boxes in Redwood Estates is 95044, although the city and ZIP code for street delivery is Los Gatos, 95033. Street addresses are usually five digits. The U.S. Geological Survey, National Geographic Names Database, lists the NAD27 coordinates of the community as 37°09′23″N 121°59′08″W﻿ / ﻿37.15639°N 121.98556°W﻿ / 37.15639; -121.98556. The community is inside area code 408 while communities further west (but outside Redwood Estates) are in the coastal area code 831.

The architecture of homes in the community varies widely. The roads are paved, but narrow and winding when compared to modern urban streets. While area housing prices have been buoyed by rising real estate prices in Silicon Valley, the area is quiet and informal. There are few lawns: most homes have redwood duff in the front yard. Poison oak is evident in the area. There are very few storm drains, curbs, or sidewalks. Roads are framed by vegetation and wind along the contours of the area's hills. As the name implies, the area is populated by the towering redwood trees ubiquitous to the occasionally fog-shrouded areas of the California coast. Redwood roots seem to serve as informal speed bumps on many of the narrow community roads.

The area has a history with ties to railroading. Until the 1940s, a Southern Pacific Railroad line to Santa Cruz passed through Holy City east of Redwood Estates. A factor in the removal of the rail line was its high maintenance cost. The portals of three tunnels along this line were closed during World War II in case an invading military force might use them as cover.

This region experiences warm (but not hot) and dry summers, with no average monthly temperatures above 71.6 °F. According to the Köppen Climate Classification system, Redwood Estates has a warm-summer Mediterranean climate, abbreviated "Csb" on climate maps.

All content from Kiddle encyclopedia articles (including the article images and facts) can be freely used under Attribution-ShareAlike license, unless stated otherwise. Cite this article:
Redwood Estates, California Facts for Kids. Kiddle Encyclopedia.