The creek begins in the Santa Cruz mountains near the Santa Clara/Santa Cruz County border, just south of the peak Loma Prieta. It then flows northwesterly to Lake Elsman, a reservoir owned by the San Jose Water Company, then on to Holy City and Chemeketa Park, then northward into the Lexington Reservoir. The creek then flows through the Los Gatos Canyon and through the town of Los Gatos and Vasona Reservoir, then northeasterly through Campbell and San Jose where it meets the Guadalupe River. 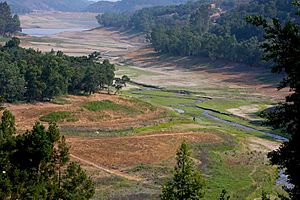 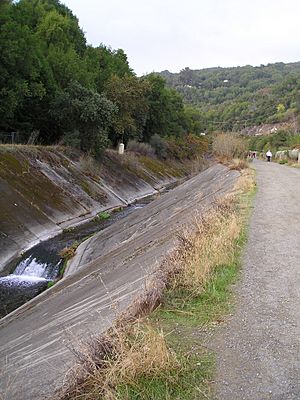 Between Lexington Reservoir and downtown Los Gatos, the creek runs in a deep concrete culvert alongside the Los Gatos Creek Trail 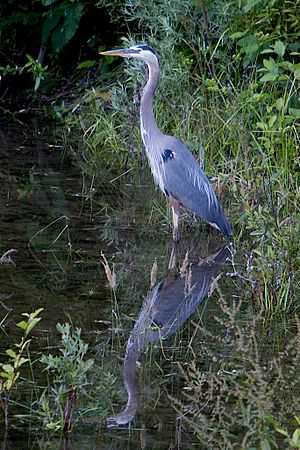 The creek was named after the Alta California land grant Rancho Rinconada de Los Gatos ("Corner of the Cats"), which itself was named for the cougars and/or bobcats that roam in the mountains above the present-day town of Los Gatos. The first settlers, a Spanish family arriving in 1839, were scouting for a homestead in the area when they heard mountain lions roaring and fighting. While frightened, they also recognized it was a good omen, for it meant water couldn't be far away. They discovered the creek and built a home in what is now Vasona Lake County Park. On Hare's 1872 map the creek was called Arroyo de Los Gatos and Zachariah Jones called it Jones Creek at the time he laid out the town he called Jones Mill (which later became the now submerged Lexington, California). Forbes Mill was established by James Forbes along the creek in the 1850s; the town of Los Gatos was subsequently built around the mill.

In 1866, extreme flooding of the Los Gatos Creek caused it to naturally cut a new channel in what is now the Willow Glen neighborhood of San Jose, running west and north of its original channel. The reshaped creek left behind a dry creek bed, known as Dry Creek. Today’s Dry Creek Road runs parallel to the creek bed.

The construction of State Route 17 in the 1950s forced much of the creek through Los Gatos to be diverted into a concrete gulch. As a Caltrans magazine from the era describes it: "Included in this project is a relocation of Los Gatos Creek for a distance of 6,000 feet, requiring a concrete line channel." The Los Gatos Daily Times on Aug. 31, 1954, reported that "bulldozers have virtually completed clearing and leveling the bed of Los Gatos Creek, and preparations are readied for laying the concrete culvert."

Also in the 1950s, the construction of the James J. Lenihan Dam formed Lexington Reservoir, which flooded much of a small valley above Los Gatos, including the former townsites of Lexington and Alma. The dam and reservoir were completed in 1952, forcing the rerouting of Highway 17. When the reservoir's water level is low, the concrete bed of the old highway through those towns can be seen, along with foundations from some buildings. In spite of these events, much of the creek maintains its natural course and beauty.

Below Vasona Park, Los Gatos Creek feeds percolation ponds that are part of the groundwater recharge system built by the Santa Clara Valley Water District. North of Lark Avenue, one can also see a structure resembling a fountain, where imported water from other reservoirs is also added to Los Gatos Creek for recharge. In the 1920s, people discovered that Santa Clara Valley was sinking because of groundwater pumping. San Jose's elevation subsided 13 feet from 1910 to 1970s, correlated with a 250 feet decline in the underground water table. The valley's aquifers were also in danger of being ruined by saltwater infiltration. Local reservoirs were built to provide water for an aggressive groundwater recharge program. While simultaneously dealing with the demands of growing cities, the water district finally managed to stop further sinking by the 1980s. Vasona and Lexington reservoirs were part of the effort. 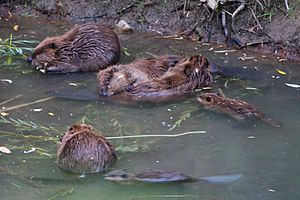 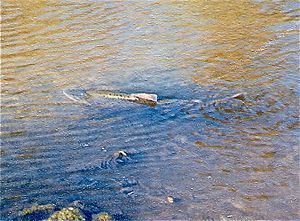 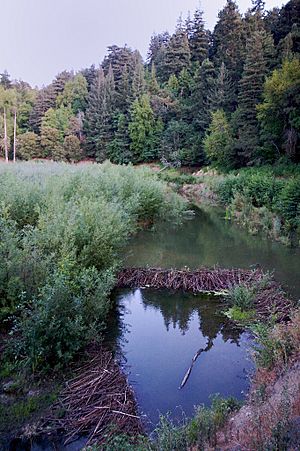 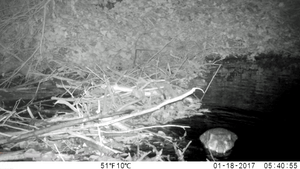 Fish were plentiful for the first settlers of Los Gatos Creek. Newspaper stories in the 1880s describe catches of 100 to 200 trout a day. One pioneer wrote that "speckled trout were so plentiful, they could be caught with your hands." Based on the locations of fish collections made in 1895 and historical habitat condition suitable for salmonids, Los Gatos Creek likely supported a healthy population of steelhead trout (coastal rainbow trout) (Oncorhynchus mykiss irideus). A 1952 California Department of Fish and Game document stated that substantial steelhead runs had not been seen in Los Gatos Creek since 1937, when agricultural pumps lowered the water table throughout the Santa Clara Valley and dewatered the lower reach. However, stream resident coastal rainbow trout populations remain in the portions of the creek maintaining permanent flow, just below and above of Lexington Reservoir. The Santa Clara Valley Water District reservoir system has now raised water tables sufficiently that lower Los Gatos Creek once again supports steelhead trout. However, stream resident rainbow trout may produce offspring which become anadromous.

Chinook salmon (Oncorhynchus tshawytscha) that migrate up the Guadalupe River and Los Gatos Creek from San Francisco Bay. Both chinook and steelhead have been spotted as far up the creek as Hamilton Avenue (see inset photo). Although some have asserted that the Chinook salmon in the Guadalupe River watershed (which includes Los Gatos Creek) are strays from Central Valley hatcheries, a 1992-1994 genetic study of 29 fish showed that some have haplotypes not found in Central Valley wild or hatchery salmon, but found in the Russian River. This is significant because the California Coast Chinook salmon Evolutionarily Significant Unit (ESU) was considered federally threatened September 16, 1999 (64 FR 50394) and reaffirmed June 28, 2005 (70 FR 37160), although the Russian River is normally considered the southernmost limit for this ESU.

Between Lake Elsman and Lexington Reservoir, the creek is pristine and closed to the public. Here, along with rainbow trout, beaver, bobcats (Lynx rufus), wild boar (Sus scrofa) and puma (Puma concolor) are extant. The beaver were restocked to the portion of Los Gatos Creek where it enters Lexington Reservoir sometime before spring 1992, and recently, a beaver reportedly served as "a hearty meal" for a local mountain lion. Historical evidence of beaver in the area includes reference by Captain John Sutter who around 1840 recorded that 1,500 beaver pelts were sold "at a trifling value" by the Indians to Mission San José, the latter only 25 miles from the town of Los Gatos. Physical proof of golden beaver in south San Francisco Bay tributaries is a Castor canadensis subauratus skull in the Smithsonian Institution National Museum of Natural History collected by zoologist James Graham Cooper in Santa Clara, California on Dec. 31, 1855. Cooper lived in Mountain View, California from October to December 1855 and collected most of his specimens on Saratoga Creek (then "Quito Creek").

Osprey (Pandion haliaetus) began to re-colonize the watershed after at least a 150-year absence with documentation of nesting sites in 2004.

The Los Gatos Creek sub watershed drains 55.1 square miles (143 km2). Los Gatos Creek originates at 2,350 feet (720 m) on Loma Prieta Mountain in the Santa Cruz Mountains and flows west to the minor Williams Reservoir above Lake Elsman (also a reservoir formed by Austrian Dam), where it is joined from the north by Austrian Gulch. Its next named tributaries are Hooker Gulch Creek, Moody Gulch and Hendrys Creek, also joining from the north, before Los Gatos Creek enters Lexington Reservoir. In Lexington Reservoir the next tributaries (left) are Aldercroft Creek and Briggs Creek (left), and by the more major Soda Springs Creek (right), then Black Creek (left), Lyndon Creek (left) and Limekiln Creek (right). Below Lexington Dam Los Gatos Creek flows northeast and is joined immediately by Trout Creek (left) then, north of Blossom Hill Road, it flows into Vasona Reservoir in Los Gatos, which is formed by Vasona Dam. In Willow Glen Los Gatos Creek is joined by Dry Creek (left) then, after crossing Interstate 280, El Camino Real and The Alameda, it joins the Guadalupe River in the Guadalupe River Park.

All content from Kiddle encyclopedia articles (including the article images and facts) can be freely used under Attribution-ShareAlike license, unless stated otherwise. Cite this article:
Los Gatos Creek (Santa Clara County) Facts for Kids. Kiddle Encyclopedia.