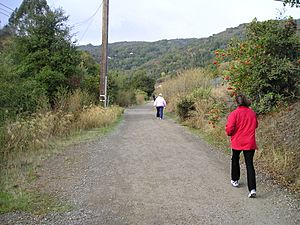 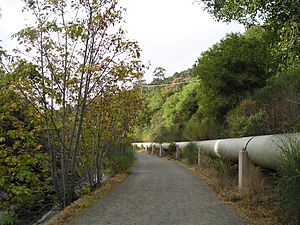 Below Lexington Reservoir, the trail runs alongside the highway, electrical lines, a water pipe from the Reservoir, and the concrete culvert containing the creek, while still providing a walk in the woods.

There are two trails between Lexington Reservoir and downtown Los Gatos. The portion of the trail on the west side of the creek is the Los Gatos Creek Trail proper and is a smooth, wide, unpaved trail on an old railway bed. The portion on the east side is the Jones Trail near the reservoir which connects to the Flume Trail. The north portion of this trail is for pedestrians only as it's windy and goes down to the stream level in several places. Jones Road is an alternative for cyclists. The Jones and Flume trail connect with Novitiate Park and the St. Joseph's Hill Open Space Preserve. There is a limited amount of parking available in Novitiate Park and at the end of Jones Road. 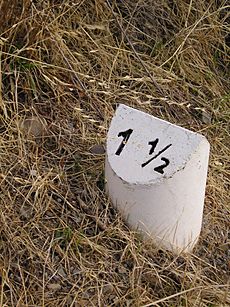 Mile marker on the trail

There are mile markers on the Los Gatos Creek trail, with the mile zero marker being located about 100 feet (30 m) north of the trailhead from Alma Bridge Road. The first half-mile offers a significant drop in elevation.

As the trail reaches downtown Los Gatos, the first access point is at the Main Street bridge. The trail then passes the 1854 Forbes Mill, which houses a history museum. It then crosses from the east to the west of Highway 17 via a dedicated bridge. From this point northward the trail is paved. Next, there is an access point immediately behind the Old Town shopping area. 250 yards to the North, there is an access point and a parking lot with a few spaces meant for the trail next to a small park north of Old Town that can be reached via Miles Avenue.

The trail next runs through Oak Meadow Park and Vasona Park. Attractions in this pair of parks include the Billy Jones Wildcat Railroad and a T33 airplane that kids can crawl on. The trail follows the east side of the lake and goes up and over the dam.

After travelling under highway 85, the trail next enters Los Gatos Creek County Park. Attractions in this park include fishing, a casting pond, and a dog park. A bike/pedestrian bridge across Highway 17 connects to the trail at this point.

The trail goes through Campbell Park. Downtown Campbell is only a three block walk to the west from the trail via Campbell Avenue. The trail is present on both sides of the creek from Campbell Park south to the bridge just north of San Tomas Expressway. An parallel mountain bike single-track trail exists east of the trail on the east side of the creek between the trail and the freeway.

The trail next passes by the back of the Pruneyard Shopping Center in Campbell. The access point is at the northwest corner of the complex, behind the parking structure. The Pruneyard has offices, shops, restaurants, and a movie theater.

Northern section of the trail into Downtown San Jose

A section of trail connects Lonus St. and Dupont Avenue, traveling under I-280. This section provides a key link for the trail as a whole, connecting Willow Glen and Downtown and removing the previous surface-street crossing of I-280. This section terminates at Dupont Avenue, immediately below a set of stairs that allows easy access to the bridge that carries West San Carlos Street over the creek and the Caltrain lines. This bridge connects the trail into central downtown San Jose.

Connection to the Guadalupe River Trail into Downtown San Jose

The city of San Jose has been actively developing the Three Creeks Trail on an abandoned former WPR/UPRR rail spur. Most of that trail is complete. The northern end of this rail spur crosses Lonus Avenue, is part of the defined project, and is awaiting the opening of the bridge over the creek just south of Lonus Avenue. Opening this bridge will allow connection to the northern section of the Los Gatos Creek Trail without requiring travel on busy Lincoln Avenue.

A bridge across highway 17 connects to the trail at the south end of Los Gatos Creek County Park.

The connection is via University Avenue and Miles Avenue, which is south of Los Gatos-Saratoga Road. The Town of Los Gatos has applied for grants to improve this access.

All content from Kiddle encyclopedia articles (including the article images and facts) can be freely used under Attribution-ShareAlike license, unless stated otherwise. Cite this article:
Los Gatos Creek Trail Facts for Kids. Kiddle Encyclopedia.