The Three Creeks Trail is a 0.9-mile (1.4 km) pedestrian and bicycle trail that runs through the Willow Glen neighborhood in San Jose, California, from Los Gatos Creek by Lonus Street to the Guadalupe River, as the western alignment. The western section of the trail has been paved since late 2018. An eastern alignment is planned, but not funded, to extend the trail to the Coyote Creek Trail.

The trail was previously a Union Pacific railway line as part of the Willow Glen Spur of the San Jose Branch line. A trestle bridge, the Willow Glen Trestle, was built in 1921 and crossed the Los Gatos Creek near Lonus Street. A train used to travel to and from a cannery. The tracks were abandoned by the early part of 2000s decade.

As of 2013 the trail was under development. Most of the western alignment was usable although mainly as dirt track.

In June 2017 construction began on the section between Coe Avenue and Minnesota Avenue. It re-opened as a paved trail in August 2018.

The trail crosses or accesses the following roads. 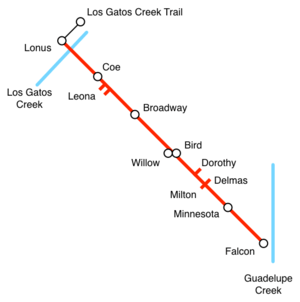 All content from Kiddle encyclopedia articles (including the article images and facts) can be freely used under Attribution-ShareAlike license, unless stated otherwise. Cite this article:
Three Creeks Trail Facts for Kids. Kiddle Encyclopedia.