Kids Encyclopedia Facts
Not to be confused with Scott Valley.

Scotts Valley is a small city in Santa Cruz County, California, United States, about thirty miles (48 km) south of downtown San Jose and six miles (10 km) north of the city of Santa Cruz, in the upland slope of the Santa Cruz Mountains. As of the 2020 census, the city population was 12,224. Principal access to the city is supplied by State Route 17 that connects San Jose and Santa Cruz. The city was incorporated in 1966.

Approximately ten thousand years ago there was a lake in the lowest elevation of Scotts Valley, and Paleo Indians lived near its shores. The lake receded to form a peat bog. Later, around 2000 BC, Ohlone people occupied areas along the remaining creeks, spring and seep areas, along permanent and seasonal drainages, and on flat ridges and terraces. Therefore, areas along watercourses are considered likely locations for prehistoric cultural resources. Several watercourses, including portions of Carbonera Creek, Bean Creek, MacKenzie Creek and the San Lorenzo River, are within the city. Permanent villages were usually placed on elevations above seasonal flood levels. Surrounding areas were used for hunting and seed, acorn, and grass gathering.

The Scott House in Scotts Valley.

Scotts Valley was named after Hiram Scott, who purchased Rancho San Agustin, including the valley, in 1850 from Joseph Ladd Majors. Before Majors, the property was owned by José Bolcoff. Bolcoff was the original settler and first European to claim title and live in what was to be Scotts Valley. He was born Osip Volkov around 1794 in Petropavlovsk-Kamchatsky, Siberia. Working as a fur trader around 1815, Bolcoff jumped ship on the Monterey Bay shoreline, quickly assimilated into the Spanish culture, and was well received by the Spanish authorities. Volkov had his Russian Orthodox Baptism validated in Mission Soledad in 1817, and was given the Spanish name José Antonio Bolcoff. Bolcoff lived with and traveled with Alta California's governor Pablo Vicente de Solá, acting as an interpreter.

Becoming a Mexican citizen in 1833, Bolcoff moved his family to his 4,400-acre (18 km2) land grant building, an adobe casa historians speculate was located near present-day Kings Village Shopping Center. Bolcoff relinquished his interest in the Rancho San Augustin, selling and accepting $400 from Joseph Ladd Majors, also known as Don Juan José Mechacas. July 7, 1846, marked the shift of power in the region from Mexico to the United States.

Hiram Scott built the Greek revival style Scott House in 1853. Situated behind City Hall, it is a Santa Cruz County Historical Trust Landmark, and is on the National Register of Historic Places. The house originally stood on Scotts Valley Drive, near where a Bank of America branch is now located.

From the 1840s, money-making activity in Scotts Valley centered on several industries: lumber, grain, the milling of grain, and most importantly the tanning of hides and working of leather. Beginning in the 1930s, peat moss was removed from Scotts Valley and taken to San Francisco to supply soil for difficult indoor plants such as gardenias. When the peat ran out, sand and gravel were quarried and sold.

The area was the site of Santa's Village, a Christmas-themed amusement park which opened on May 30, 1957, on a 25-acre (10 ha) site which was formerly Lawridge Farm, part of the former Rancho San Augustin. "Residents" of the park included Santa, Mrs. Santa, and elves and gnomes who operated the rides and sold tickets. There was a petting zoo, a bobsled ride, a whirling Christmas tree ride, and a train ride, as well as a Fairy Tale Land. The park was sold in 1966 but continued to be operated under lease by the Santa's Village Corporation. When that corporation went bankrupt in 1977. the owner considered launching a Knott's Berry Farm type of complex but was denied a permit by the city of Scotts Valley, and the park closed for good in 1979.

Scotts Valley's most famous resident was film director Alfred Hitchcock, who lived in a mountaintop estate above the Vine Hill area from 1940 to 1972. Florence Owens Thompson, made famous by Dorothea Lange's Migrant Mother photograph, died in Scotts Valley in 1983.

Scotts Valley is known to be home of The BarnThe Barn, a coffee house with a large area for concerts. In the '60s Janis Joplin, Grateful Dead performed in the Barn. Merry Pranksters and Ken Kesey used to show up there, as described in detail in the last chapter of Tom Wolfe’s book The Electric Kool-Aid Acid Test.

Santa's Village was an amusement park in the '60s, located near highway 17, on which site later Borland campus was built.

According to the United States Census Bureau, it has a total area of 4.6 square miles (12 km2), all land. It is in central Santa Cruz County, in the northern portion of the North Central Coast Air Basin.

Air in Scotts Valley is typically maritime in origin, as it moves over the land from the Pacific Ocean. Summers are warm and dry, while winters are mild and generally rainy. Most rain falls as a result of winter Pacific storms between the months of November and April. Sound levels in Scotts Valley are typically in the range of 57 to 65 dBA, except for somewhat higher levels within 150 feet (46 m) from Highway 17.

Scotts Valley has mild weather throughout the year, enjoying a Mediterranean climate (Köppen Csb) characterized by cool, wet winters and warm, mostly dry summers. Due to its proximity to Monterey Bay, fog and low overcast are common during the night and morning hours, especially in the summer.

A computer virus discovered in Scotts Valley in September 1990 was named after the city, although Scott's Valley (computer virus) is spelled with an apostrophe.

Scotts Valley is the home of IDE Incorporated, a product design and development company.

Scotts Valley is the home of Zero Motorcycles, a company which designs and produces electric motorcycles.

Scotts Valley is the home of Gardening Unlimited, a company which distributes hydroponics and organic gardening products to its 16 national stores.

Scotts Valley is the home of Canepa Design, a company that sells and restores high-line European and American vehicles.

From its early years as a stop on the stage route across the mountains, the Scotts Valley area has provided services to travelers. With the growing popularity of the automobile in the early 20th century, the area became commercialized and tourism developed as a local industry.

In the early 1920s, Edward Evers established Camp Evers at the junction of the State Highway and Mt. Hermon Road. Camp Evers consisted of a small store, gas pumps, dance hall and tents, becoming a resort and rest stop for travelers. 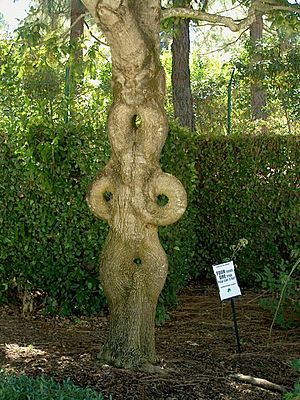 The Beverly Gardens were established in the 1930s and featured a collection of exotic birds and animals, a restaurant, and cabins.

Axel Erlandson opened The Tree Circus in 1947, featuring trees grafted and trained in strange and unusual shapes. Bright "life size" painted dinosaurs overlooking Highway 17 were added to the Tree Circus in 1964 when it changed its name to The Lost World. Surviving trees have since been moved to Gilroy Gardens.

Santa's Village, one of three locations in America's first theme park chain, was established in 1956. It was the most popular of the many attractions, attracting millions of visitors to Scotts Valley for over twenty years, and it was the last of Scotts Valley's theme parks to close its doors, in 1979. H. Glenn Holland, who had already developed a Santa's Village elsewhere the previous year, leased 25 acres (100,000 m2) at the former Lawridge Farm, which was a portion of the former Rancho San Augustin for the Scotts Valley location of Santa's Village. The park maintained a historically correct team of Mexican burros that lived on the back 20-acre (81,000 m2) field. Four reindeer from Unalakleet, Alaska, pulled Santa's sleigh. All the buildings were designed to look like log chalet-type structures, replete with snowy roofs and gingerbread trim. One chalet housed a legendary fresh gingerbread bakery. Theme-appropriate music flowed from speakers hidden in towering redwood trees. In 1977 the Santa's Village Corporation had filed for bankruptcy, and in 1979 the park's gates were finally closed. The site is currently a playing field at the former headquarters of Borland.

Scotts Valley is also near Big Basin Redwoods State Park, Henry Cowell Redwoods State Park, and Roaring Camp Railroads. The town is surrounded by coast redwood forests. The city of Santa Cruz lies to the south. A relatively large municipal skateboard park, where pro skateboarder Eric Costello died in October 2005 due to improper helmet use, is near Skypark, the site of a former airport, in central Scotts Valley.

Evidence regarding blighted conditions in the Redevelopment Area of Santa's Village and the Skypark Airport was established in the year 1990.

According to Scotts Valley's 2020 Comprehensive Annual Financial Report, the top employers in the city are:

From 1950 to 2011, Scotts Valley was home to Bethany University, a four-year private Christian university. The campus was leased to Olivet University for the 2011–2012 school year, but Olivet was unable to complete a purchase and moved back to San Francisco in May 2012. The parent Assemblies of God denomination is seeking another buyer for the campus.

Baymonte Christian School serves students from pre-Kindergarten through eighth grades. Baymonte is a non-denominational Protestant Bible school that was founded in 1968. In 2003, it earned the distinction of being a Blue Ribbon School, a distinction awarded to one school in 25 across the nation.

Monterey Coast Preparatory School, a private school offering a college preparatory curriculum for middle and high schoolers with learning differences, moved from its original location in Santa Cruz to Scotts Valley in 2014.

All content from Kiddle encyclopedia articles (including the article images and facts) can be freely used under Attribution-ShareAlike license, unless stated otherwise. Cite this article:
Scotts Valley, California Facts for Kids. Kiddle Encyclopedia.