Carbonera Creek is a 10.2-mile-long (16.4 km) watercourse in Santa Cruz County, California, that eventually flows to the San Lorenzo River.

The stream rises in the rugged Santa Cruz Mountains and flows in a generally southwesterly direction. The city of Scotts Valley is situated within the watershed of Carbonera Creek and its main tributary to the north, Bean Creek. Carbonera Creek joins Branciforte Creek near the 500 block of Market Street in Santa Cruz. Branciforte Creek discharges to the San Lorenzo River, which empties into the Pacific Ocean at Monterey Bay at Santa Cruz. 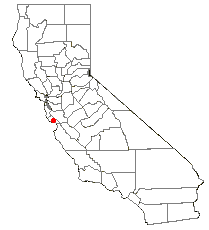 The average annual precipitation in the Carbonera Creek watershed ranges from 85 to 120 centimeters per year, ninety percent of this falling between November and April. Carbonera Creek flows at an average of 0.8 to 1.0 cubic foot per second (0.023 to 0.028 m3/s). Lower Bean Creek has a high average flow of 3.0 cubic feet per second (0.085 m3/s). However, the flow in both creeks greatly depends on the season; in fact, flows in these creeks typically drop dramatically during the dry summer season. 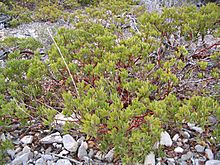 Arctostaphylos are common on the drier rocky slopes of the Carbonera Creek watershed.

Within the Carbonera Creek watershed is one of the three known Maritime Coast Range Ponderosa Pine forests, a rare assemblage of vegetation narrowly restricted to sandy, infertile Zayante soils formed over Santa Margarita Sandstone. This habitat is only found in coastal Santa Cruz County and is found in a part of the Carbonera Creek catchment in the southwestern part of the City of Scotts Valley on the slopes of Mount Hermon, extending to the south. The surface soil and subsoil drain very rapidly and do not retain enough water to support local climax species such as Coast redwood or Douglas fir. The Ponderosa Pine (Pinus ponderosa) withstands the stresses of this xeric habitat and typifies the open plant community, which also supports rare species of flora such as the Bonny Doon manzanita (also called the silver-leaved manzanita) (Arctostaphylos silvicola) and the endangered Ben Lomond wallflower (Erysimum teretifolium). There are two Federally listed endangered species of insects within this sparse forest.

All content from Kiddle encyclopedia articles (including the article images and facts) can be freely used under Attribution-ShareAlike license, unless stated otherwise. Cite this article:
Carbonera Creek Facts for Kids. Kiddle Encyclopedia.