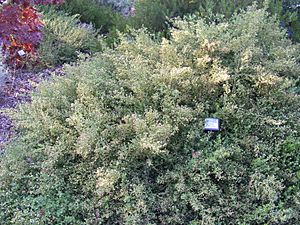 Baccharis pilularis flowering in a garden.

Baccharis pilularis, called coyote brush (or bush), chaparral broom, and bush baccharis, is a shrub in the daisy family native to California, Oregon, Washington, and Baja California. There are reports of isolated populations in New Mexico, most likely introduced.

The plants are found in a variety of habitats, from coastal bluffs, oak woodlands, and grasslands, including on hillsides and in canyons, below 2,000 feet (610 m).

Coyote brush is known as a secondary pioneer plant in communities such as coastal sage scrub and chaparral. It does not regenerate under a closed shrub canopy because seedling growth is poor in the shade. Coast live oak, California bay, Rhus integrifolia, and other shade producing species replace coastal sage scrub and other coyote bush-dominated areas, particularly when there has not been a wildfire or heavy grazing.

In California grasslands, it comes in late and invades and increases in the absence of fire or grazing. Coyote bush invasion of grasslands is important because it helps the establishment of other coastal sage species.

The Baccharis pilularis shrub is generally smaller than 3 metres (9.8 ft) in height. Erect plants are generally mixed (and intergrade completely) with prostrate plants. It is glabrous and generally sticky.

The stems are prostrate to erect which branches spreading or ascending. The leaves are 8–55 millimetres (0.31–2.17 in) long and are entire to toothed and oblanceolate to obovate, with three principal veins.

The flower heads are in a leafy panicle. The involucres are hemispheric to bell shaped. This species is dioecious (pistillate and staminate flowers occur on separate plants). Both staminate and pistillate heads are 3.5–5 millimetres (0.14–0.20 in) long. Phyllaries are in 4–6 series, ovate, and glabrous. The receptacles are convex to conic and honeycombed. The staminate flowers range from 20–30 and there are 19–43 pistillate flowers.

This and other Baccharis species are nectar sources for most of the predatory wasps, native skippers (small butterflies), and native flies in their ranges.

Baccharis pilularis is cultivated as an ornamental plant, and used frequently in drought tolerant, native plant, and wildlife gardens, and in natural landscaping and habitat restoration projects. The cultivar ground cover selections have various qualities of height and spread, leaf colors, and textures. The upright forms are useful for hedges and fence lines, and year-round foliage.

Coyote brush is usually deer-resistant. The plants are also drought tolerant after maturity, requiring watering once a week until established, and then about once per month during the first summer. They can mature in one to two years. The plants prefer good drainage.

All content from Kiddle encyclopedia articles (including the article images and facts) can be freely used under Attribution-ShareAlike license, unless stated otherwise. Cite this article:
Baccharis pilularis Facts for Kids. Kiddle Encyclopedia.