Arctostaphylos ( from ἄρκτος árktos "bear" and σταφυλή staphulḗ "bunch of grapes") is a genus of plants comprising the manzanitas () and bearberries. They are shrubs or small trees.

There are about 60 species of Arctostaphylos, ranging from ground-hugging arctic, coastal, and mountain species to small trees up to 6 m tall. Most are evergreen (one species deciduous), with small oval leaves 1–7 cm long, arranged spirally on the stems. The flowers are bell-shaped, white or pale pink, and borne in small clusters of 2–20 together; flowering is in the spring. The fruit are small berries, ripening in the summer or autumn. The berries of some species are edible.

Arctostaphylos species are used as food plants by the larvae of some Lepidoptera species including Coleophora arctostaphyli (which feeds exclusively on A. uva-ursi) and Coleophora glaucella. 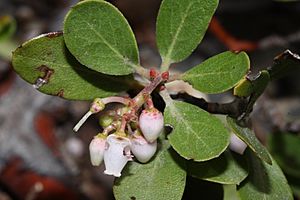 Pinemat manzanita (A. nevadensis) occurs from Washington to California.

Manzanitas, the bulk of Arctostaphylos species, are present in the chaparral biome of western North America, where they occur from southern British Columbia in Canada, Washington to California and New Mexico in the United States, and throughout much of northern and central Mexico.

Three species, the bearberries, A. alpina (alpine bearberry), A. rubra (red bearberry) and A. uva-ursi (common bearberry), have adapted to arctic and subarctic climates, and have a circumpolar distribution in northern North America, Asia and Europe.

An unusual association of manzanita occurs on Hood Mountain, in Sonoma County, California, where stands of pygmy forest dominated by Mendocino cypress are found.

Cultivation is generally difficult due to fungal diseases, and often salinity and alkalinity. Overhead watering should be avoided in hot weather. Some cultivars are easier to grow.

According to Philip V. Wells in The Jepson Manual and other sources, there are two subgenera of Arctostaphylos:

All content from Kiddle encyclopedia articles (including the article images and facts) can be freely used under Attribution-ShareAlike license, unless stated otherwise. Cite this article:
Arctostaphylos Facts for Kids. Kiddle Encyclopedia.