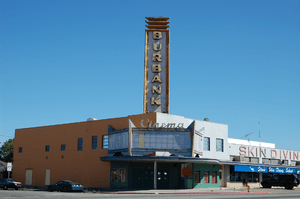 The historic Burbank Theatre is an area icon and currently the home of a radio station, and also is representative of the architectural significance of the Victorian, Bungalow, Deco and Craftsman style homes. With over 35 recorded significantly historical homes, many residents are restoring these small but quaint homes, making the area much more desirable — and one of the few affordable areas left in Santa Clara County to live. The Burbank Community Association along with many area businesses, residents, and home owners are working as a collective team to ensure the Burbank neighborhood continues to flourish.

The area is also a center for antique stores and is centrally located to Santana Row, Westfield Valley Fair, and also the downtown area.

KQED, the local NPR affiliate, ran a story about Burbank's status as an "Urban Island", and the local communities desire to not be annexed by the city of San Jose. [1] 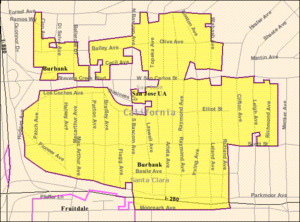 According to the United States Census Bureau, the CDP has a total area of 0.4 square miles (1.0 km2), all of it land.

The Burbank District is roughly defined as an unincorporated area along Bascom Avenue between West San Carlos Street and Interstate 280. The area is entirely surrounded by the City of San Jose. The U.S. Geological Survey shows the area's name as official on the San Jose West, California 7.5-minute Quadrangle and it has been assigned a feature ID of 277480 in the National Geographic Names Database. Official NAD27 coordinates are given as 37°19′24″N 121°55′50″W﻿ / ﻿37.32333°N 121.93056°W﻿ / 37.32333; -121.93056. It is an areal feature occupying some of the area between I-280 and San Carlos Street extending east almost to Meridian Avenue and west almost to SR17. The area of this district is an irregular shape. Some parcels considered inside the district, including the Luther Burbank Elementary School, 4 Wabash Avenue, lie outside this boundary. The area was named for Luther Burbank.

The Burbank Sanitary District operates the sewer collection lines, handles waste collection and streetsweeping in the unincorporated portions of the Burbank area. Established in 1940, the Sanitary District is the only local government, other than LBSD, specific to the neighborhood. The District is governed by a Board of five members, elected to four-year terms, which meets monthly. Legal and engineering services, as well as all construction and maintenance, are contracted out.

Sewer services are provided to other unincorporated areas of the Burbank Community by the West Valley Sanitation District, an independent sanitation district that also services neighboring cites and unincorporated areas. Waste collection in the other areas are the jurisdiction of the County of Santa Clara. Sewage treatment is provided by the San Jose/Santa Clara Water Pollution Control Plant a joint powers agency of which both districts are members.

The second Burbank fire station, sold in the late 1970s, is on the northeast corner of Scott Street and Flagg Avenue. The unusually-high garage door is the only clue today that the residence was once a fire station. The fire district became part of Santa Clara County Fire Department, (a.k.a. Central Fire District,) about 1960 and is served by San Jose Fire Department under a contract.

The Burbank Theater is another local landmark supporting use of the name. It is no longer a working theater.

The Burbank Business Circle is the name of a unique San Jose owned roadway that runs through the parking lot of the shopping center on the southwest corner of Bascom Avenue and Stevens Creek Blvd. The shopping center currently houses the Bank of the West, Alex's 49'er bar, and long-time landmark Time Delicatessen.

The Burbank Lions Club on Bascom Avenue is a local community service organization. Many businesses have come and gone with the Burbank name, but the Burbank Pet Hospital and the Burbank Press continue service on West San Carlos Street.

The Luther Burbank School is located at 4 Wabash Avenue.

The only public school located in Burbank is Luther Burbank School, a K-8 elementary school located on San Carlos Street and Wabash. It is the only school operated by the Luther Burbank School District (LBSD). Founded in 1906, the District celebrated its centennial in 2006. Burbank-area students attend high schools in the Campbell Union High School District.

All content from Kiddle encyclopedia articles (including the article images and facts) can be freely used under Attribution-ShareAlike license, unless stated otherwise. Cite this article:
Burbank, Santa Clara County, California Facts for Kids. Kiddle Encyclopedia.