Santana Row (abbreviated as SR or The Row) is a residential and commercial district of West San Jose in San Jose, California, in Silicon Valley.

Santana Row is intersected by Stevens Creek Boulevard, and nearby to Westfield Valley Fair and the Winchester Mystery House.

Santana Row derives its name from Frank M. Santana, who served on San Jose's planning commission in the 1950s, who is also the namesake for the area's Frank M. Santana Park.

The 42-acre "village within a city" was developed as a luxury, mixed residential and shopping district between 2001-2002, for a cost of $450 million and was at the time regarded as "the most ambitious project of its kind in the United States". In 2010, it was called "an arguably successful mixed-use development".

The site was previously a Town and Country Village. On August 19, 2002, during construction, the largest building at Santana Row (Building 7, "Santana Heights") caught fire. The fire eventually caused $130 million in damage, and embers spread to at least 13 apartment buildings, some with wooden roofs, nearly a mile downwind of the shopping center on Moorpark Avenue, across Interstate 280. The main fire spread to five alarms, while the secondary fires required six alarms. It was the largest structure fire in San Jose's history. 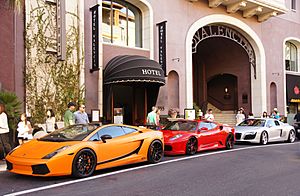 Exotic cars outside the Hotel Valencia 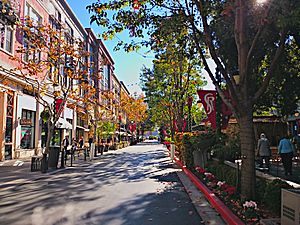 All content from Kiddle encyclopedia articles (including the article images and facts) can be freely used under Attribution-ShareAlike license, unless stated otherwise. Cite this article:
Santana Row Facts for Kids. Kiddle Encyclopedia.